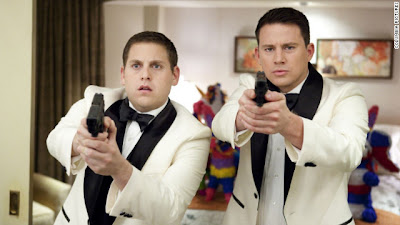 I remember thinking, several years ago, that it would be hysterically funny if a comedy made a really meta-joke, and referred to one of it's characters looking a lot like the movie star playing the part.  As in, say, "Hey, has anyone told you that you look just like Tom Cruise?" when it IS Tom Cruise.  Get it?  Get it?  But then, Steven Soderbergh did an extended run on this idea in Ocean's 12, wherein Tess (played by Julia Roberts) pretends to be the movie star Julia Roberts in order to get the gang closer to the item they need to steal.  My reaction?  Meh.

In the same vein, I've wanted many of the film "updates" of 80s television properties (Charlie's Angels, Starsky and Hutch, etc.) to be more aware of the fact that they're trying to breathe life into shows that got cancelled for lack of interest over 20 years ago.  The new film 21 Jump Street does just that...and almost does it too much.  At one point, Nick Offerman's Deputy Chief of police tells Jonah Hill and Channing Tatum that their being sent to a program resurrected from the 80s, and that the people in charge are completely out of new ideas, and that they think that we're all too stupid to notice.  It's just a little...on the nose.

But the rest of the film is pretty darn fun.  Tatum exhibits surprisingly good comic timing, and Jonah Hill does the schtick that made Jonah Hill Jonah Hill.  He's Seth from Superbad with a handgun.  The film suffers, as all action-comedies are apparently required to, when it's time to get the plot to the finish line (see: Tropic Thunder).  Jokes are jettisoned in favor of car chases and explosions.  21 Jump Street sticks more jokes in that most, but it's still a pretty drastic shift (for the worse) from the first two thirds of the film.

And, as long as we're complaining, can we please be finished with the one-friend-overhears-something-bad-the-other-friend-says-about-him-and-overreacts-threatening-the-friendship trope?  It's dead, and a time-waster.  We know everything's going to be okay.

Those two complaints do little to take away from the overall joy of the experience, though...just watching Hill, Tatum, and the rest of the cast (notably Ice Cube, Rob Riggle, and Dave Franco) trade profane verbal barbs will plaster a smile on your face (if you like that sort of thing...which I do) for the perfectly tight 109 minute runtime.  21 Jump Street is like a friend you love to hang out with, you might not want to introduce it to mom, but it'll keep you laughing.