Don't Poke the Bear: The Law of Chastising Boo-Birds 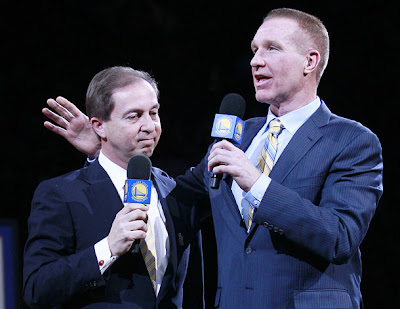 Monday night was "Chris Mullin Night" at the Golden State Warriors/Minnesota Timberwolves game. Mullin, the most popular Warrior ever, had his jersey retired before the game. These sorts of ceremonies are invariably feel-good affairs for fans, and it was going just as expected on Monday night. Then Warriors owner Joe Lacob took the mircophone and things got ugly.

Bill Simmons wrote a scathing article yesterday (3/21/12) on Grantland.com about the sixty ways that the Warriors franchise has antagonized its fans (through bad drafting, terrible trades, and horrific luck) since it last won a championship in 1975. Lacob, though (it should be noted in his defense), is a new owner and not responsible for the bulk of the Warriors woes. However, what he is responsible for is trading Ekpe Udoh and Monta Ellis to the Milwaukee Bucks for Andrew Bogut and (via a second trade with the San Antonio Spurs) Richard Jefferson. In short, after decades of losing, Lacob apparently gave up on this season by trading an up-and-coming talent (Udoh) and one of the most exciting scorers in the NBA (Ellis) for a currently injured-for-the-season big man (Bogut) and an uninspiring small forward with an albatross of a contract (Jefferson). So when Lacob took the mic, the fans let him have it.

Mullin gets cheered, as you can see, as he walks out. His cheers fade as he attempts to defend Lacob. As Mullin retreats, Hall-of-Famer and greatest-Warrior-ever Rick Barry grabs the microphone and tries a different tack. He doesn't defend Lacob, he chastises the fans. And that's when the interesting thing happens. The boos reach their zenith as Barry exhorts the fans to have some class.

The biblical explanation of this phenomenon comes from St. Paul, who says both that when he didn't know what coveting was, the law of "thou shalt not covet" came in and awoke in him "all sorts of covetousness" (Rom 7:7-8) and that the law was brought in so that the trespass might increase (Rom 5:20). It is fashionable to think that if you can open someone's eyes (educate them) to their "sin" (or, for instance, their classlessness) they'll realize that they should stop. The Golden State fans illustrate, as Paul supposed, that, in fact, the opposite is often true: chastisement increases sin!

The old sayings stick around because they're true: There's no quicker way to get a kid to stick their hand in the cookie jar than to forbid them, and, apparently, there's no easier way to get a booing crowd to boo harder than to call them out on their classlessness and demand that they stop.
Posted by Nick Lannon at 8:00 AM