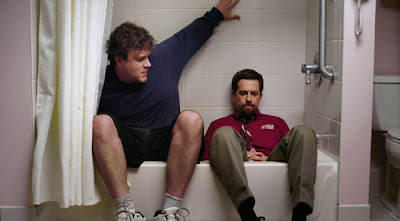 Jay and Mark Duplass, perhaps best known for the recent comedy Cyrus, are known for their contributions to the sub-genre known as "mumblecore." A cinematic movement characterized by ultra-low production values, tiny-in-scope stories, and amateur actors, most mumblecore films struggle to be accessible to wide audiences. Cyrus may be, in fact, the only mumblecore film you've ever heard of, and that's because it starred "real" actors (John C. Reilly, Marisa Tomei, and Jonah Hill). The Duplass brothers have gone the real actors route again in Jeff, Who Lives at Home, casting Jason Segel and Ed Helms as brothers and Susan Sarandon as their mother. Whether they give these actors anything in particular to do, though, is another matter.

In fact, "having something to do" is a major theme of Jeff. Segel plays the titular Jeff, who does indeed live at home. He's a man who waits for signs from the Universe, and tries to follow them. It's led him, perhaps predictably, to do next to nothing. He's estranged from his brother, but a series of coincidences (or are they?) repeatedly bring them together, while the boys' mother deals with a secret admirer at work. The film is really about how three different people deal with a major life question:  what should I do, and why? The performances are all good, and the writing is excellent. A hallmark of a Duplass brothers script (and most mumblecore writing) is that the people talk like real people talk. It's quite enjoyable to watch these characters talk about life's questions.

Jeff, Who Lives at Home, though, is short on answers...on purpose. The "action," if it can be called that, shambles along, one thing happens and then another, until a huge unexpected crisis arises out of nowhere. Is the universe telling you what to do by inscrutable signs? Are you on your own to figure out your purpose? Jeff, Who Lives at Home isn't telling, but it's a pleasant experience nonetheless. Watching Jeff is like a visit back to the house you grew up in: it's a little ramshackle now, everything seems smaller than you remember it, but it's comfortable, and you wouldn't want to be anywhere else.