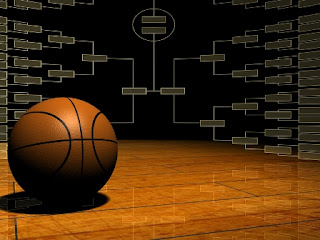 There was a time when I was just like you. I would have read the headline of this post and been outraged. "But," I'd sputter, "No one plays defense in the NBA!" "College kids care more and try harder!" (Argument #1) "Anyone can win the NCAA Tournament; that's the beauty of it!" (Argument #2) I submit to you, though, that people who currently use these retorts (at least #1) probably haven't watched the NBA game in a while.
With diffused talent (there are 345 Division 1 basketball programs spread across 32 conferences, whereas there are only 30 total NBA teams), and with its best players going to the NBA before they've matured, the college game has gotten worse. Put another way, a vast majority of college players aren't good enough to play in the NBA. Coincidentally, the NBA game has gotten better. My own theory is that, in 2005, the playoff race in the Western Conference became neck and neck from very early in the season. The last team to earn a playoff spot, the Memphis Grizzlies, went 45-37, the second-best record for a #8 seed since the NBA began using its current playoff format in 1984. All of a sudden, everyone had to try hard for pretty much the whole season just to try to make the playoffs. And it was catching. Defense picked up, Defensive Player of the Year was suddenly an award that everyone wanted to win, and teams started playing hard every night. 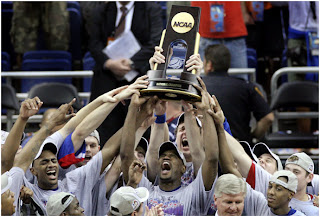 So, my argument is that, post-2004-05, one could no longer effectively argue that the quality of play (whether by talent or by effort) was inferior in the NBA product. For a simple example, check out the difference in shooting percentages between the NCAA Championship Game last year and the NBA Finals. In the NCAA game, Connecticut shot a paltry 36% from the field. You'd expect a team that shot so poorly to lose. Butler, however, made only 12 baskets in the entire game, shooting a heinous 19% and losing by 12. By contrast, over the course of the six game NBA Finals, both the Miami Heat and the Dallas Mavericks shot 45%. Let's all face it together: the quality of play in the NBA is better. So that takes care of Argument #1.
On to Argument #2, that the beauty of the NCAA tournament is in the fact that anything can happen. It is, in fact, very rare for all four #1 seeds to make it to the Final Four. In essence, then, proponents of Argument #2 are saying that they prefer a situation which reduces the chances of the best team to win the championship. I don't. NCAA teams play over 30 regular season games (depending on conference and invitational tournaments), honing chemistry and strategy. A team that has a bad shooting night can comfort itself that it could still go 33-1, 32-2, 31-3, and so on. But you can't win the NCAA tournament going 5-1. You lose, you're out. This is exciting, no doubt, but it's not a true representation of the state of the basketball season. Regular season champions are not celebrated, on the NCAA level or the NBA level. Yet it's much harder, in college, to go 32-2 (like Kentucky did this year) than to win the six consecutive games required for an NCAA tournament championship. It's a much more difficult challenge to win the 16 games over four series that an NBA champion must.
In last year's NBA Finals, the Miami Heat won Game 1. However, over the course of the series, Dallas proved that they were the better team, and won the championship. The better team on a given night is not necessarily the better team, other than on that particular night. I'd much rather have the best team (overall) win than submit myself to the vagaries, however exciting, of a single elimination tournament, especially one in which the quality of play is so low. 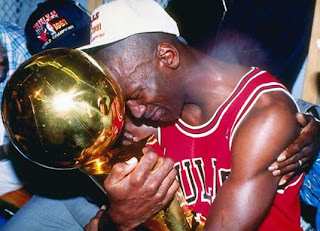 Now, HAVING SAID ALL THAT...the NCAA tournament is a theologically profound in a way that the NBA playoffs can never hope to be.
Imagine, for a moment, the Christian life in a way that we've all imagined it at one time or another: as the process of climbing a ladder. I remember, at one point my my life, being challenged to climb that ladder; i.e. to get closer to God. To improve. And, in a sense, we do feel like our Christian lives are like this: understanding more, relating better, perhaps even struggling less with things that were once a terrible burden. Consider, though, how easily such progress can be lost. Like the recovering alcoholic just one drink away from total oblivion, the Christian seemingly always finds him- or herself on the bottom rung of the ladder, just about to fall off. We're climbing, to be sure, but the rungs we've climbed seem to be disappearing beneath us.


Remember the great Beatles song "Getting Better?"  The chorus goes "I've got to admit, it's getting better/A little better all the time/it can't get no worse." (ht PZ) This is the Christian life in a nutshell, and the NCAA tournament experience.  As a team wins, they progress: Sweet Sixteen, Elite Eight, Final Four. But it can blow at any seam! A team is always one bad shooting night (or defensive night, etc) away from total elimination and obscurity. To the extent that we can say that we "advance" in the Christian life, it's sobering to note that "[our] sin is always before [us]" (Psalm 51:3) and we're mere moments away from needing that saving help again, having never really progressed beyond the last rung of that ladder.
Posted by Nick Lannon at 8:00 AM