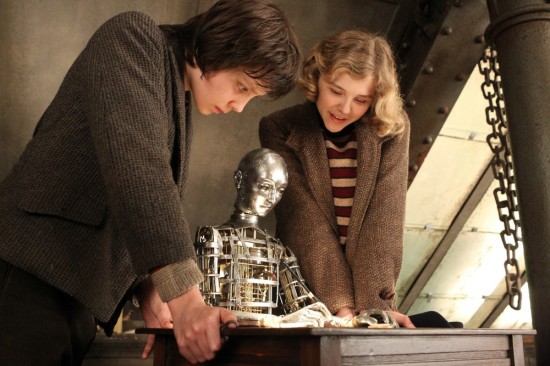 Martin Scorsese's latest film is certainly a marvel.  Boasting the best use of 3D since Avatar, Hugo tells the story of an impossibly cute young orphaned boy (Asa Butterfield), living inside the walls (and variously-sized clocks) of a Parisian train station with an automaton, who meets a wildly precocious girl (Chloe Grace Moretz) who hold the key (literally) to the great mystery of his life (and hers).  And really, that's the problem.  It's all just a little on-the-nose.  The A.V. Club, which I read more than I read my Bible, has a feature series called "Why Don't You Like This?" wherein two of its writers (one pro and one con) debate the merits of a piece of art.  Tasha Robinson's take on Hugo basically mirrors (and may have even influenced!) my own.

Scorsese is at his best (Casino, Goodfellas, The Departed, The Aviator, and on and on) telling gritty stories.  The only "grit" in Hugo is the glowing puffs of wonder that float around inside the train station, making you "wonder" if this story takes place on earth at all.  The "villain" (Sacha Baron Cohen) is so tame that there is literally no worry that everything won't work out just perfectly in the end.  I suppose that's the problem in the end: every descriptor needs quotation marks.  The crotchety old man who gets his heart softened by the wide-eyed moppet is crotchety for a reason so banal that it might as well be that somebody had to have his heart softened, as that is a requirement of movie of this type.

The film is not without its wonders, though...a slightly-more-than-a-montage about the goings-on at one of the first ever film studios is a joy, and the automaton doing its thing is fascinating, too.  Most beautifully, Scorsese proves that he still knows his way around a camera.  The performances are all good (Cohen's aside), though slight (Emily Mortimer is especially wasted), but everything is just too saccharine to be believed.  Kevin McAllister was more likely to succumb to the Wet Bandits than any character in this film was of breaking a nail.  It's beautiful to look at, but too beautiful to be real.