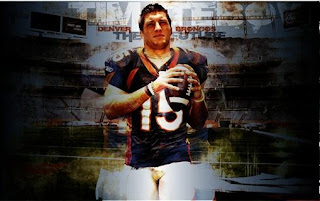 This story is actually from November of last year, but just came to my attention now, brought on by the recent Brady Quinn/Tim Tebow flap.  For those not in the know, GQ Magazine recently ran an oral history of last year's Denver Broncos season called The Year of Magical Stinking.  In it, many of Tebow's teammates and fellow NFLers offered opinions on the man, his season, and, of course, his expressions of faith.  Brady Quinn, another quarterback on the Broncos (and a Christian), is quoted on the subject of Tebow's public displays of faith, saying:


If you look at it as a whole, there's a lot of things that just don't seem very humble to me. When I get that opportunity, I'll continue to lead not necessarily by trying to get in front of the camera and praying but by praying with my teammates, you know?

In the wake of this becoming a "story," as anything regarding Tebow must, I was sent (ht DP) a link to this story about Kurt Warner, another famously and openly Christian quarterback, also commenting on Tebow's expression of his faith.  Warner says, among other things, that 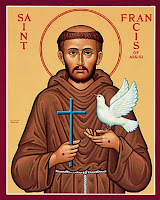 You can’t help but cheer for a guy like that….But I’d tell him, ‘Put down the boldness in regards to the words, and keep living the way you’re living. Let your teammates do the talking for you. Let them cheer on your testimony.’...There’s almost a faith cliche, where (athletes) come out and say, ‘I want to thank my Lord and savior.’… As soon as you say that, the guard goes up, the walls go up, and I came to realize you have to be more strategic. The greatest impact you can have on people is never what you say, but how you live. When you speak and represent the person of Jesus Christ in all actions of your life, people are drawn to that. You set the standard with your actions. The words can come after.

This quote puts me in mind of the famous saying attributed to St. Francis:  "Preach the Gospel always.  When necessary, use words."  Francis, Warner, and Quinn all seem to agree that Tebow ought to let his actions speak for his faith, not his words.  Quinn sees the words as an annoyance, Warner sees them as flawed strategy, and Francis sees them as something like putting the cart before the horse.  They're all forgetting one thing, though:  If Jesus were accurately described by his followers' actions, no one would want to have anything to do with him!

Gandhi famously said, "I would be a Christian -- if I ever met one." This quote is commonly used to claim that Gandhi was an admirer of Jesus and his teachings and to point out the hypocrisy of Christians (e.g. we preach "turn the other cheek" but don't do it). In reality, though, this reveals that Gandhi didn't understand Christianity at all. Christianity is a religion founded on the idea that human beings can't live up to Jesus' teaching. That's the whole point. Jesus came to save a sinful humanity, not to author a life manual for people able to make good decisions. This is the error that Quinn, Warner, and Francis are making, too.  It's quite true that actions speak louder than words; that's why we must practically shout the Gospel for it to be heard over our undermining actions.
So here's hoping that Tim Tebow keeps talking about his Lord and Savior, Jesus Christ.  His actions, no matter how noble, certainly won't illuminate Him.
Posted by Nick Lannon at 11:56 PM