LeBron James and the Unwinnable Game 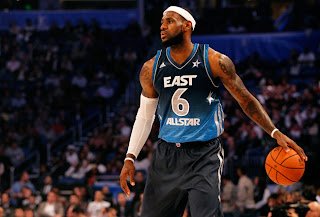 LeBron James cannot win.  It seems that this is true both literally (as in an NBA Championship) and figuratively (as in whatever he does, his critics are displeased).  Sunday, James participated in the NBA All-Star game.  His East team was losing by double digits (it should be noted that no one tries too hard in the first three-and-a-half quarters of this game) when he came onto the floor in the fourth quarter.  James' effort alone can be credited for bringing the East back and making a game of it.  Then, the last minute happened.

With East down by one point with 1:15 remaining, LeBron passed to a wide open Dwyane Wade under the basket.  The uncovered Wade fumbled the ball out of bounds.  Blake Griffin the scored on a put-back dunk at the other end with 37 seconds remaining to give the West a 150-147 lead.  (See?  I told you, no defense) After an exchange of free throws (Wade hit two of two and Kobe Bryant hit one of two) the East called timeout with the ball in their possession and 16 seconds on the clock.  What transpired in those 16 seconds has been the talk of the sports-o-sphere ever since.  The East inbounded the ball to James who hit Deron Williams for an open three point attempt.  This was clearly a called play by East coach Tom Thibodeau.  Not only was Thibodeau furiously drawing on his whiteboard during the timeout, but you could see the play develop (Williams faking toward the baseline and coming off a Dwight Howard screen) on the telecast.  Any shot by James at this point, despite the potential heroics, would have been a direct contravention of his coach's orders. 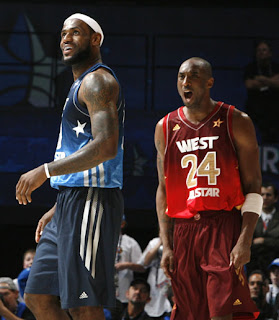 Williams' three was a terrible shot, well short, and it barely hit the rim.  It was so terrible, in fact, that no one was ready for the rebound, and it struck several players as they were getting their hands up and bounced high into the air.  Williams recovered the rebound near the left sideline with seven seconds left.  He got the ball to LeBron (after a second or two), who was at this point some 30 feet from the basket, beyond the top of the key.  With only seconds to play and the clock running, and with Kobe Bryant playing close defense, LeBron attempted a pass to Wade in the corner, despite Carmelo Anthony being more open and closer to him.  Blake Griffin intercepted the pass and the game was effectively over.

So let's look at what happened.  LeBron has been excoriated for not taking the last shot.  Interestingly, he was yelled at by Bryant on the floor in the immediate aftermath of the turnover.  Michael Wilbon suggested that Bryant knew that there was the potential for "a moment" between them, a mano-a-mano sort of confrontation, and was angry that LeBron seemed to shrink from letting it play out.  Perhaps, though, LeBron had Kobe's recent history in mind.  With 1:21 remaining (just prior to the Wade fumble), Bryant attempted (or, more accurately, forced) a 15 foot turnaround while well-covered at the other end of the floor.  He air-balled the (ill-advised) shot and gave the East an opportunity to win that a better shot (or, gasp, a pass!) might not have afforded them.  If not for Wade's subsequent error, the East likely would have won. 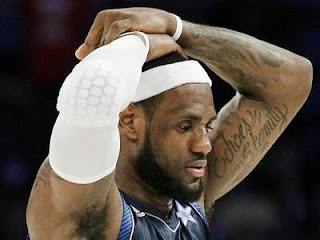 So the basketball world prefers Kobe's "heroics" despite the fact that it gave his team less of chance to win the game.   LeBron had the ball in a similarly closely-guarded situation, with only six seconds left, much further from the basket.  His decision to pass (despite the poorly chosen destination) increased his team's chances to win, despite several demonstrable errors by teammates (which are, of course, forgotten).  And yet we are consistently told that Kobe is the "winner" and "the one you want with the game on the line" and that LeBron "shrinks from big moments."  Despite the rhetoric, passing was the right thing to do.

But, just for fun, what if LeBron had shot the ball?  What if he had even made the shot?  Want to know what the story for the week would have been?  "It was just the All-Star game.  Let's see him do it when it counts."  A mistake made the game a defining moment.  Success would have been thought more meaningless than the slam dunk contest (which, by the way, is an event that James is often lambasted for refusing to appear in).  For LeBron James, the 2012 All-Star Game was the unwinnable game.
Posted by Nick Lannon at 3:19 PM