Do What the Good Book Tells You To 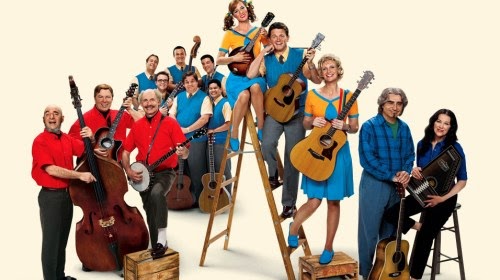 In Christopher Guest’s hilarious 2003 mockumentary A Mighty Wind, a folk group called The New Main Street Singers performs a song called “The Good Book Song.” For years, I’ve been planning to write a post about how the song totally misunderstands the point of the Bible. After all, the most repeated line in the song is “Do what the good book tells you to.” My post was going to be all about how the Bible is not as much about what you have to do as it is about what has already been done for you.

I popped the film soundtrack into my car’s CD player the other day, though, and the song came on again. Here’s the first verse and chorus:

Now God said to Noah, “I don’t want no sinnin’
I’ve been telling you this since in the beginnin’
You gotta round up your sons and all of their women
Because you’re going on a big boat ride
Now gather all the animals by the pair
Build a big ship about a million square
And put all the animals right in there
And sail away on the tide.”

But what if Noah had just said, “No sir”?
Well we’d all have fins and scaly skins
We’d breathe through gills instead of nostrils
And we’d eat fish food instead of vitamin pills


The second verse is much like the first, this time suggesting an alternate future that might have come about if David had ignored God’s call to fight and defeat Goliath:

But what if David had whined and waited?
We’d live like slaves to Philistine knaves
Our bosses would all be thirty feet tall
We’d wash their clothes with a fire hose
And we’d sleep in the cracks between their toes


See? All law, right? Totally not what the Bible is about. But this time, I heard something different, something that actually motivated me to write this piece: “The Good Book Song” is honest about the ramifications of breaking God’s law, but doesn’t go too far.

While it’s perfectly true that there’s no mention of the gospel in “The Good Book Song,” the song doesn’t overdo it on the consequences of breaking God’s law. It’s honest about them: if you break God’s law, there are horizontal consequences. In the world of the song, ignoring God’s commandments to build an ark or to slay Goliath lead to fish/people hybrids and a life of servitude to the Philistines. But what breaking God’s commandments doesn’t lead to is a broken relationship with God!

There is a realm about which “The Good Book Song” doesn’t speak, however, and it is the main subject of the actual Good Book. The Good Book is a single-minded tale: a story of a God who—not waiting for his rebellious people to reform their ways (not waiting for them to “do what the Good Book tells them to”)—comes to his chosen while they are still sinners.