Life is Savage...and Then You Die 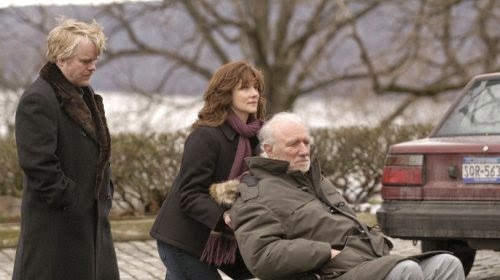 In Tamara Jenkins’s moving family drama The Savages, Philip Seymour Hoffman and Laura Linney play John and Wendy, siblings who must care for their somewhat-estranged and dementia-plagued father (Philip Bosco) when his partner dies. They’re able to get him into a nursing home near Hoffman’s home, but Linney insists that they try to find someplace nicer. Eventually, she gets them an interview at a nicer place, hoping that the profound level his dementia has reached won’t be noticed. Unfortunately, it is noticed, and their father isn’t accepted. As they walk out to the car, Hoffman confronts Linney about her desire to move their father into a “nicer” facility.

“This upward-mobility fixation of yours,” he says, “is counter-productive and, frankly, pretty selfish. It’s not about Dad, it’s about you. You and your guilt. That’s what these places prey upon.”

“Of course you do,” says Hoffman. “Because you’re the consumer that they want to target; you are the guilty demographic. The landscaping? The neighborhoods of care? They’re not for the residents, they’re for the relatives, people like you and me who don’t want to admit to what’s really going on here.”

Angry now, Linney says, “Which is what, John?”

Now Hoffman shouts, “People are dying, Wendy! Right inside that beautiful building, right now, it’s a [bleeping] horror show. And all this wellness propaganda? And the landscaping? It’s just there to obscure the miserable fact that people die. And death is gaseous, and gruesome, and it’s filled with [bleep] and piss and rotten stink.”

Stunned into silence, Hoffman by the severity of his own words and Linney by the truth of them, the siblings stare in silence as a resident is wheeled by in a wheelchair. Finally, they get into their car and go back to the not-as-nice nursing home.

This scene shocks me every time I see this film. Its power is only amplified by its truth; it’s like a punch to the gut. We’re all going to die, and we spend all of our time trying to deny it.

How much of your Facebook wall is taken up by posts trying to get you to look younger, feel younger…heck, some of them seem to promise to actually help you be younger! Yoga, diets, exercise…it’s one of dominant religions today. And, for the record, I can’t argue—as much as I might like to—that those things aren’t good for you and won’t make your life better. I’d like to see some stuff on my wall about the life-lengthening properties of Oreos, but those posts don’t seem to exist. But this wellness propaganda, as Philip Seymour Hoffman puts it, doesn’t have an answer to “the miserable fact that people die.”

Paul Zahl’s idiosyncratic little book PZ’s Panopticon: An Off-the-Wall Guide to World Religion looks at what some of the world’s most popular religions (including religions not commonly called religions, like “family” and “sex”) have to offer a dying person. It’s a fascinating read, mostly for Zahl’s dogged insistence that to be of value a religion must offer some hope to someone who is actually and literally dying.

Christianity offers such a hope. Jesus and his interpreters knew that “upward mobility” is a fool’s errand. As a friend puts it, “there’s no cheese up that tunnel.” A nicer funeral home doesn’t ultimately matter to someone who is looking their end in the face. What matters is a hope that this isn’t the end.

In the book of Revelation, John has a vision of the end of things. He sees a great throng, crowded around God’s throne. He asks who they are, and he gets this for an answer:

“These are the ones coming out of the great tribulation. They have washed their robes and made them white in the blood of the Lamb. Therefore they are before the throne of God, and serve him day and night in his temple; and he who sits on the throne will shelter them with his presence. They shall hunger no more, neither thirst anymore; the sun shall not strike them, nor any scorching heat. For the Lamb in the midst of the throne will be their shepherd, and he will guide them to springs of living water, and God will wipe away every tear from their eyes” (Rev. 7:14-17).


This life is a great tribulation. It’s gaseous and gruesome. Ask anyone who’s been here a while. The Savages does a wonderful job of showing us that. Christianity offers a hope that this life and The Savages cannot (though the film does offer its characters some hope at the end): redemption. A savior. We are offered an eternal home, where we will never suffer anything. Jesus Christ our substitute has taken the tribulations of our lives onto his own shoulders and gives us his own heavenly home.

We don’t have to hang our hats on a nicer nursing home to get us where we want to go. We’ve been washed white—sinless, forever—in the blood of the Lamb.
Posted by Nick Lannon at 1:52 PM