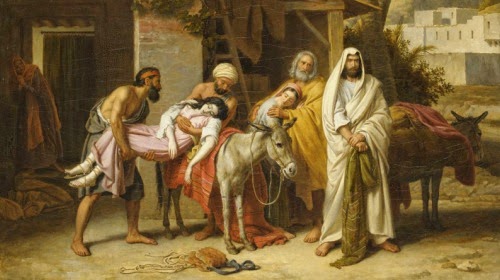 The story that fills Judges 19 is probably the most sordid in the entire Bible. A man takes a concubine and is eventually welcomed into someone’s home as a visitor, after having some serious problems extricating himself from a different social situation. In the middle of the night, the men of the town (the town of Gibeah) come to the house and bang on the doors, demanding that the Levite be sent out, so that they can have sex with him. The master of the house, who has welcomed the Levite and the concubine into his home for the evening, goes out to try to reason with these men. “No, my brothers, do not act so wickedly,” he says, “since this man has come into my house, do not do this vile thing. Behold, here are my virgin daughter and his concubine. Let me bring them out now. Violate them and do with them what seems good to you, but against this man do not do this outrageous thing” (v. 23-24).

The men refused to listen to the master of the house, and kept demanding that the Levite be sent out to them. Finally, in response -- and in order to save his own skin -- the Levite seizes his concubine and forces her outside. She is raped and abused all night, surviving it all, only to die “with her hands on the threshold” (v. 27) -- i.e. almost back inside the house -- as the sun rose the next morning. The Levite puts her body on a donkey and returns home, where he sends a piece of her body to each of the twelve tribes of Israel, to get them to retaliate against the people of Gibeah.

Let’s be clear: there’s not a lot of righteousness to go around in this story. The men of Gibeah, perhaps most obviously, are corrupt, sex-addicted murderers, willing to defile themselves with anything and anyone who crosses their path. The Levite is a coward at best and a party to rape and murder at worst, giving his concubine to the mob and remaining safely inside the house. The master of the house is himself no saint, offering his own daughter and his welcomed guest in the place of the Levite in order to calm the situation down and restore some semblance of peace. The only person in the story who might be called blameless is the concubine herself.

It is the blamelessness of the concubine that reveals the profundity of the story, and points us ahead to the truly blameless one, Jesus Christ.

Think of it. When the reaper knocks at your door…who’s going out? When the time comes, and you’re caught in a situation that’s going bad, to whom do you turn? Obviously, the setting of this particular story is seamy and the activity is horrifying; none of us -- thank God -- will likely ever face a situation such as this. But let’s make it simpler: there’s bad news at the door. Perhaps you’ve been hiding some income on your yearly taxes and you get a phone call from the IRS. Maybe you forget to delete your browser history before your wife looks at it. Maybe one of your kids confronts you about the level of attention you’ve paid to her life. You’ve been caught out. There’s a pounding at your door, and whoever’s on the other side wants their pound of flesh. To you, it feels like they’re out to ruin your life; to kill you.

Our first instinct is never to face the music. It’s to run. At the end of Fargo, Jerry Lundegaard (William H. Macy) is arrested climbing out the back window of a seedy motel, while in the midst of shouting to the cops at the front door, “I’ll be right with you!” That’s our move. We climb out the back window. We throw our innocent concubine outside.

Jesus “faces the music” of God’s wrath toward sin on our behalf. We get to stay inside, in safety and comfort, away from the kind of holiness and power that caused Peter to say, “Depart from me, for I am a sinful man” (Luke 5:8) and Isaiah to say, “Woe is me, for I am lost! I am a man of unclean lips” (Isaiah 6:5). Going into the presence of Almighty God will mean our deaths as surely as going out into the courtyard meant the death of that concubine. Jesus stands in our place -- not waiting for us to ask him to, but willingly stepping out the front door while we climb out the back window. Indeed, while we were yet enemies of God, he died for us (Romans 5: 10).
Posted by Nick Lannon at 2:12 PM

Email ThisBlogThis!Share to TwitterShare to FacebookShare to Pinterest
Labels: theology