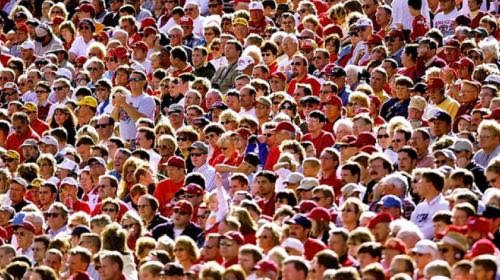 You’ve probably heard of Kickstarter. Heck, you’ve probably funded a project with it. If you haven’t, or don't know, Kickstarter is a “crowd funding” website, on which creative types can pitch their productions to “investors.” The investors get quotation marks because they do not own any part of the finished piece (film, album, installation, what-have-you); they get a gift in exchange for their financial support. For instance, for a $500 pledge, an artist might promise to work your name into a song on the album they’re trying to fund. For a $10,000 pledge, you might be given a speaking part in the film they’re trying to get off the ground.

Recently, the creators of the popular television show Veronica Mars responded to long-standing fan desire for a Veronica Mars feature film by establishing a Kickstarter page for the project, trying to raise $2 million to make the movie. They raised…wait for it…$5.7 million from 91,585 donors.

There’s an old dramatic maxim—echoed by none other than Joss Whedon—that it’s an artist’s job to give audiences what they need, not what they want. And Veronica Mars violates that maxim so flagrantly, it sometimes seemed like I was watching [co-writer/director Rob] Thomas and company fulfilling Kickstarter pledge orders when they might have been making a movie.


Tobias’ point seems to be this: offering people what they want will get the money rolling in, but it will fatally undercut your ability to make a good film. In other words: fan-service is the death of creative freedom.

The same could be said, I think, of religion.

I don’t think it’s any coincidence that most of the largest churches in America proclaim this kind of message. The money rolls in.

The problem with this “what I want” refrain is that it can’t actually help me. When my life starts sliding off the rails, it’s all well and good to go to the handy self-help manual (Ten Steps to Financial Security, Eight Steps to Recovered Relationships, or the like), but it becomes decidedly less “well and good” if the manual lets me down. What happens when I follow the ten steps and still find myself financially insecure? Or when I follow the eight steps and they only serve to further alienate my family?

As it turns out, I need something different than what I want. I need the truth.

What people need to hear from religion is an accurate diagnosis of their condition: unable to find the power within themselves to help themselves. Wanted Religion can’t offer a profound solution because it refuses to diagnose a profound disease. Needed Religion recognizes our plight and can offer a weighty cure: a savior who substitutes himself for us.

It will probably always be true that Wanted Religion will rake in the money: it’s offering a much more desirable front end. Needed Religion, however, will be there when the bankrupt devotees of Wanted Religion need somewhere to turn and have no money left to buy their way in.
Posted by Nick Lannon at 2:19 PM