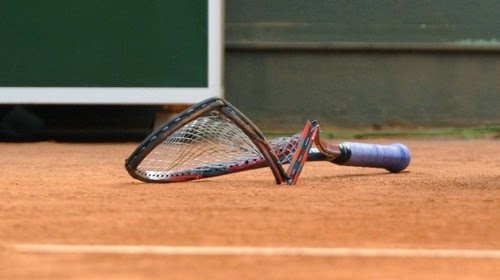 The other day, I broke my tennis racket (I can’t bring myself to type “racquet”…I tried). Though I’m sure you’ll suspect that I “doth protest too much,” I didn’t throw it down in anger; it slipped out of my hand on a serve. Whatever happened, I recently found myself in Sports Authority standing in front of a giant wall of tennis rackets and facing an unexpected existential crisis.

It turns out that there are several “levels” of tennis rackets for sale to the public. There’s the $50 level, the $100 level, and the $200 level. Now, it should go without saying that the better a player you are, the more you spend on your racket. No one needs to tell us this. So there I stood, wondering what kind of tennis player I was.

No, that’s not quite right. There I stood, wondering if an expensive tennis racket could convince anyone  -- most of all myself -- that I am a good tennis player.

Let’s be clear: I’m a $50 tennis player. There’s just no question. Just yesterday, I lost convincingly to a guy who played without shoes. I am not making this up. He’s not a practiced shoeless player; he was just unable to get his shoes on over some scrapes on his feet. Against me, though, shoelessness is no barrier to victory. So if it’s inarguable that I am a $50 tennis player, why did I spend so much time in front of the $100 rackets?

I have no trouble admitting that I’m not a $200 tennis player. Few people do, I imagine. It’s at the lower levels that we begin to draw the distinctions more carefully. “I’d never be so presumptuous as to own a $200 tennis racket,” we say, “but surely I’m not the bum I’d appear to be if my racket only cost $50. There are plenty of players worse than me; the $50 rackets are for them.”

Does this sound familiar? It ought to, even if you’ve never hit a forehand in your life. “I’m not perfect,” we Christians are fond of thinking (if not saying), “but at least I don’t do what that guy does.” This kind of interpersonal ranking is our most beloved pastime, and we do it for a simple reason: we don’t want to be the worst. As long as there’s someone out there worse than us, we can feel good about ourselves by way of comparison.

And make no mistake: we are desperate to feel good about ourselves.

Who would we be if we were the worst? Who would love us then? Would anyone want to be friends with a $50 tennis player? I can’t imagine it.

Into this vortex of self-loathing and self-deception, God speaks an incredible word:

But now thus says the Lord,
he who created you, O Jacob,
he who formed you, O Israel:
“Fear not, for I have redeemed you;
I have called you by name, you are mine. (Isaiah 43:1)


The Gospel truth is that my identity does not rest in the quality of my tennis. Praise God for that. It doesn’t reside in my indefensible decision to appear to be a $100 player when I am only a $50 player. My identity is God’s to give.

Anyone for tennis? I’ve got a nice racket that I don’t have to live up to.
Posted by Nick Lannon at 9:16 AM