The Gospel is Better than Cheerios (Seriously) 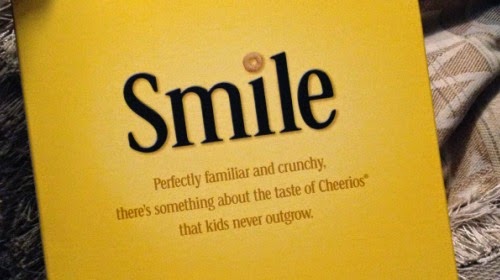 Have you noticed that General Mills isn’t even claiming that Cheerios taste good anymore? Don’t get me wrong, I’m a Cheerios guy—I was the kid who sent away for the Cheerios T-shirt with my name on the back. I’m a purist, too, none of this Honey Nut or Chocolate for me…although a case can be made for Multi-Grain Cheerios. In any event, I was sitting at the breakfast table recently, reading the Cheerios box that I’ve read a billion times before, and I noticed something new. On the back on the box, under the giant text commanding me to smile, was this sentence of text: “Perfectly familiar and crunchy, there’s something about the taste of Cheerios that kids never outgrow.”

Now, I’m living proof of the truth of that statement. But there’s still something creepy about it. They don’t say that Cheerios are delicious, or good for you. They basically just say that they’re crunchy…and familiar.

And that’s the one that gets us, right? Cheerios feel like childhood. A bowl of cheerios makes you feel like a kid with a full weekend day ahead of you. There’s comfort in the familiar, even if it isn’t very tasty.

The law works in this same way.

Though an argument—and a good one—can be made that the law is “good for you” (in the same way that Brussels sprouts, dentist visits, and an hour on the elliptical machine are), it doesn’t seem to me that many people would argue that the application of the law feels good. The law, according to St. Paul, exists to show us our sin (Romans 3:20). That is wonderfully needed, and prompts us to call out for a savior, but being shown my sin never feels good. So even though we might admit that the law serves a valuable purpose, we would probably all agree that it’s not a very enjoyable experience in the moment of its working.

So why is it that, instead of running away from the law—as you might expect people to do—we seem to embrace it again and again (Galatians 3:1-3), undertaking self-justifying projects and trying (mostly subconsciously) to use it to earn favor before God?

I have a friend, Jady Koch, who has said that “we are born lawyers; we have to learn about grace.” That’s true. My young children do the equivalent of suing each other every day. They negotiate with their parents and with each other, trying to wrangle a favorable outcome, or trying to avoid punishment. They are five and three and already familiar with the workings of a courtroom.

Getting “what we deserve”—or at least arguing for it—feels as much like home as your mom’s macaroni and cheese. It is the familiar place that we return to, time and time again. Unfortunately, we vastly overestimate what we deserve.

The Gospel is the delicious food we’ve never tasted. It seems, doesn’t it, as though we’re born liking Cheerios. Once we grow up, though, Cheerios become something we can take or leave. Once we grow up, we become aware of breakfasts like bacon and eggs, or smoked salmon platters, or Nutella-filled crêpes. Once we’ve tasted such delicacies, Cheerios lose their luster, and we never go back.

May the same be true of the Gospel. Now that we’ve tasted the delectable life beyond deserving and grown—at least a little bit—accustomed to the shocking newness of it, a life under the Law has no attraction left for us. It can call out to us, appealing to familiarity; and familiarity will, from time to time, woo us. The Law continues to serve its good purpose: showing us our sin and pointing us to our savior. But though the Law is good, the Law can’t ever claim to taste good. Not now that we’ve tasted the Gospel.

Let us always cling to that sweetest taste of all: a Savior who comes to those who don’t deserve him. It’s an unfamiliar meal, but there’s never been a better one.
Posted by Nick Lannon at 3:44 PM