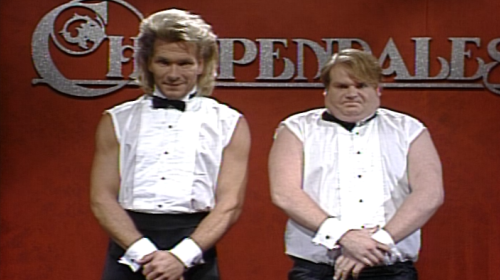 Recently on Louie, the television-show brain-child (it’s not quite right to call it a “comedy,” and C.K. writes, produces, directs, stars and edits the show himself) of comedian Louis C.K., his character is romantically pursued by an overweight woman named Vanessa. In an A.V. Club piece about the place of “fat” female characters in television and other pop culture, Libby Hill makes an interesting point about the results of telling a fat woman that she’s not fat:

Vanessa is written in the most droll and likable way because C.K. wants to make it perfectly clear that the reason she is rejected is because of her size. Not even being the platonic ideal is enough when you’re an overweight woman.

This is not lost on Vanessa, and she has plenty of thoughts on the matter. But what she has to say may give viewers pause. In the scene’s most profound moment, she posits that the meanest thing you can say to a fat girl is that she isn’t fat. And she’s right. The show doesn’t go on to explain why that is, but it’s not so hard to parse. To tell a fat woman—who’s fully aware of her weight, her size, her body, who gets up every morning and looks in the mirror the same as anyone—that she’s not fat confirms all of her worst fears about herself: Ultimately, being fat is something to feel intensely ashamed of. It’s so shameful that loved ones will deny it to her face, lest her heart break at the realization.


I should note, in Louis C.K.'s defense, that his episode is intended to illustrate (and subvert) the ways in which "overweight" women are typically marginalized in media. He writes her as "the platonic ideal" so that his character's shallowness is blatantly obvious.

Here’s a true story: While I was doing my pre-ordination Clinical Pastoral Education (serving as a chaplain in a VA Hospital in Pittsburgh), I walked into the room of a sick man. When I asked him how he was doing, he said, “Son, I’m dying.” Shocked, I sputtered something along the lines of, “How do you feel about that?” The man said something profound—something that has stuck with me all these years and will likely stick with me until I die: “Well,” he said, “I think I’ve lived a good life. I’m just not sure it was good enough.”

When I discussed this interaction with my supervisor later, I was told that I should have assured the man that he had nothing to worry about, that his life was good enough. This, I was told, would have comforted the dying man.

But this is the same as telling a fat woman she isn’t fat.

In the same way that an overweight woman is fully aware of her weight, size, and body, and gets up every morning and sees the same in the mirror, this man looked in the mirror and saw a disconnect between the person that he was and the person that he knew he ought to be. We all have that mirror moment, every day, that feeling of disappointment at what we see, that longing to be more—or better—than we are. For me to say, “No, you’re wrong. You’ve been good enough” would be to confirm his worst fear: he is such a sinner that I’m too ashamed to even mention it, lest his heart break at the realization.

God never looks at a Christian and says, “Good enough.” There’s no such thing. Instead of waiting for us to become something we can never be, God gives that which he requires: perfection. In exchange, he takes our imperfection onto himself. He speaks a loving word over his righteous son, and that word is applied to us. He calls us perfect, he calls us holy, and he calls us beloved. And since God’s words call into being the thing which he speaks, we become what are naturally not: perfect, holy, and beloved.