Save Our Children from The Princess and the Three Knights 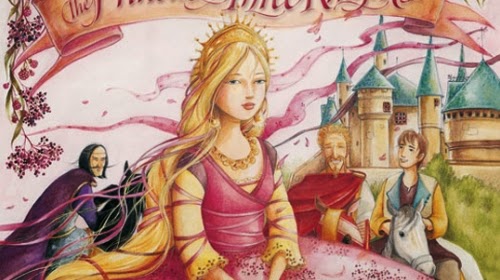 The Perpetrator: The Princess and the Three Knights by Karen Kingsbury

The Crime: Implying that God is searching out people with pure motives for blessing.

The Scene of the Crime: The Princess and the Three Knights is about a princess whose father decides that only a knight “who treasured the princess for who she was on the inside” would be worthy of her hand in marriage. So the King devises a series of tests for her three suitors, culminating in a cliff-side test allegedly for horsemanship. The king says, “You will pretend that the princess is riding with you and race as fast and hard as you can straight for the drop-off. We will see which of you can take the princess closest to the cliff without going over the edge.” The first two knights (both illustrated as handsome and haughty) take their horses to one foot and six inches from the edge of the cliff. Their actions prove the king’s suspicions correct: the first knight is arrogant and the second knight is driven by greed. The third knight wins the hand of the princess by saying, “Your majesty, I love the princess. She is more precious to me than anything in the kingdom. I wouldn’t take her anywhere near that cliff.”

The king rejoices at his pure-heartedness and awards him the hand of his daughter.

The Evidence: “Over the years, the knight protected the princess again and again. For the knight was brave and strong, loyal and kind. But most of all, his faith in God had taught him that true love always protects. He cherished the beautiful princess all the days of her life. And they lived happily ever after.”

Genesis 6:8 “But Noah found favor in the eyes of the Lord.”

Mark 2:17 “And when Jesus heard it, he said to them, ‘Those who are well have no need of a physician, but those who are sick. I came not to call the righteous, but sinners.’”

“Other people think the Bible is a book of heroes, showing you people you should copy. The Bible does have some heroes in it, but…most of the people in the Bible aren’t heroes at all. They make some big mistakes (sometimes on purpose). They get afraid and run away. At times they are downright mean. No, the Bible isn’t a book of rules, or a book of heroes. The Bible is most of all a story. It’s an adventure story about a young Hero who comes from a far country to win back his lost treasure. It’s a love story about a brave Prince who leaves his palace, his throne – everything – to rescue the one he loves.”


It is the grace of God that makes Noah, for instance, acceptable to God, not some inherent righteousness that he possesses. Human beings are not, on their own, capable of the kind of pure-heartedness displayed by the third knight...that kind of goodness comes to us as a gift—as shocking to us as it is to those who witness it.

The Verdict: Our kids need to hear that their chosen-ness doesn’t depend on the purity of their hearts or their intentions. Jesus came to Earth to save people who are arrogant, greedy, and who don’t make good decisions. In fact, that’s the only kind of people there are. Our place—clutched to the chest of Christ—is secured by Christ himself, not by us.
Posted by Nick Lannon at 3:47 PM