Stephen Colbert and the Meaning of Life 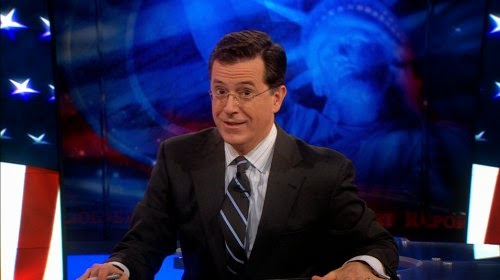 On the November 12, 2013 episode of The Colbert Report, Stephen Colbert interviewed David Christian, host of the new H2 series “Big History.” The stated goal of the series is to “let us get to know the entire history of the universe.” As Colbert jokes, “Why not something more ambitious?”

There’s certainly a lot of grist for the mill here, but the part I’d like to focus on is Christian’s attempt to answer the question amongst questions, a question that he seems to think his show answers successfully: What is the meaning of life?

Christian and Colbert begin a little bit at loggerheads when Christian suggests that “Big History” is interested in creating a map on which people are to place themselves. “We already have this kind of map,” protests Colbert, “it’s called the Bible.” Christian starts implying that his show has some of life’s most important answers with statements like, “With a course like this, you can put all this knowledge together. You can see a coherent story of the whole of the past, and it’s full of meaning.”

When he’s actually asked what the meaning of life is, though, he prevaricates for a few moments before listing a series of dates and events, such as the universe appearing 13.8 billion years ago and the subsequent appearance of more complicated organisms, such as human beings. He calls it “a wonderful story about how we got to be here.” Colbert, however, corrects him, “That’s [sic] the events of life, that’s not the meaning of life.”

Christian tries to explain that “the meaning is like a map” again, and Colbert says that the Bible is like the key in the corner of the map, explaining “the distances of everything.” There’s a theologically important distinction here that serves to clarify the difference in Colbert’s (a famously devout Catholic) and Christian’s thinking.

Christian leaves the discovery of meaning up to the person. In his paradigm, people are something like “free agents,” placing themselves on the “map of meaning” that “Big History” provides, and then making choices about the direction in which they’d like to take their lives. Colbert, in his discussion of the map’s key and its explanation of distances, is talking about sin.

As Colbert notes, science is very good at describing life’s events. As Christian’s hesitation evinces, science isn’t so good at discussing life’s meaning. Life, in fact, makes no sense without the ability to discuss Genesis 1-3. Without knowledge of a perfect law-giving creator God, our external actions and internal motivations will remain a mystery to us. Our struggle toward and failure to reach perfection will make no sense.

It’s not up to each individual to “find themselves” on the map…we need to have our location announced to us. As Johann Georg Hamann said, "The whole of history...like nature" is "a sealed booked, a concealed witness, a riddle that cannot be solved, without plowing with another heifer than our reason.” The “other heifer” he’s referring to is the Bible. We are sinners, bound to try to be the gods we can never be. The only way we’re ever able to understand ourselves -- to find meaning in life -- is to be given the key to the map:

There is a God. We’re not him, but we wish we were. We rebel against him. In order to reconcile us to himself, this God sent his Son to take our just condemnation onto himself. This is his finished work. Getting use to the idea? That’s the meaning of life.
Posted by Nick Lannon at 12:56 PM