Jameis Winston and the Trouble with Morality 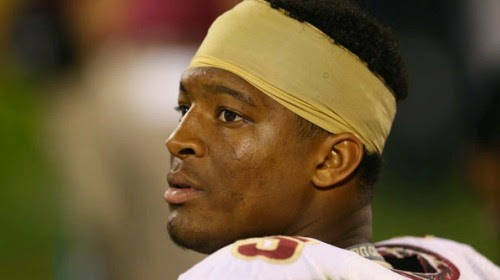 In the December 2 issue of Sports Illustrated, Michael Rosenberg wonders (in an article entitle “The Morality Hazard”) about the place of morality in the Heisman Trophy voting. The Heisman, given annually to “the outstanding college football player whose performance best exhibits the pursuit of excellence with integrity,” is ordinarily simply given to the nation’s best player. This year, people are wondering if that’s a good idea.

Florida State’s Jameis (“Jay-miss”) Winston is the nation’s best player. There can be no doubt. He’s a quarterback, his team is undefeated, his stats are off the charts, and the unspoken rule that a freshman shouldn’t win was broken last year by Johnny “Johnny Football” Manziel. The catch is that Winston has been accused of raping a female Florida State student last December (the State’s Attorney has since said there will be no charges filed). However, the “incident,” a classic case of “he said/she said,” hangs like a pall over his incredible season.

So what are voters to do? How much stock do they put in those two words: “with integrity”? Rosenberg seems to argue that the Heisman should drop the so-called “morality clause,” saying,


“‘The pursuit of excellence with integrity’ is an alluring standard. But it's a mythical one. Ask former Heisman winner Reggie Bush, who forfeited his 2005 Heisman for a less grievous transgression. No matter what the Heisman Trust [the governing body] believes, or voters try to decipher, the only thing we can vouch for right now is Winston's football excellence.”

Rosenberg is right, but he never puts the dot on the I or the cross on the T: he never says why the alluring standard of athletes pursuing excellence with integrity is mythical. Here’s the truth: no one has integrity. With a firm morality clause in place, the Heisman Trust should never give the award. Ever.

It’s not hard to imagine Jesus taking a look at the Heisman hopefuls and calling them “white-washed tombs.” In fact, it’s the job of their school’s PR departments to do the white-washing! And don’t think I’m singling out college athletes; we all have PR departments, they’re just internal ones. As Chris Rock says, when people meet us, they don’t actually meet us. They meet our representative. This representative is the creation of our personal PR department, and we create him or her because we know one thing for sure: the morality clause is a problem for us!

Ready for a seeming non sequitur? I love Tom Cruise. Stay with me for a second: when Tom Cruise pulled his jumping-on-Oprah’s-couch move, declaring his love for Katie Holmes, a lot of people jumped off the Cruise bandwagon. When he said, as a total outsider, that Brooke Shields didn’t need to take medication for her post-partum depression, even more people abandoned ship. When Scientology became a more and more public part of Cruise’s life, the bandwagon got really, really lonely. But I’m still here. Why? Because I love the movies. Cocktail, Mission: Impossible, Minority Report, Collateral…I could go on and on. If I had to stop watching Tom Cruise movies because he’s an insensitive, manic, probable cult-financier…I wouldn’t be able to watch any movies at all!

As soon as we make “morality clauses” (as soon as we invoke the Law), we exclude the entire human race.

Jesus was at great pains to take our focus off the outside (“white-washed”) and put it on the inside (“tombs”). The further in we go, the more corpses we have to wade through. Finally, we get to the heart. What do we find? "The heart is deceitful above all things, and desperately sick; who can understand it?" (Jeremiah 17:9) The deeper we go into the human heart, the more people get excluded by our morality clauses. When we get to the true heart of morality -- the command to be perfect (Matthew 5:48) -- we realize that "there is none righteous; no not one" (Romans 3:10).

The Jameis Winston story shines a light on a truth of human nature: we are sinners. Every last one of us. Christianity, though, is so much more profound than the Heisman Trust. God isn’t looking for someone who can “pursue excellence with integrity,” he is in the business of saving sinners. The function of the Law -- of morality clauses -- is to shine light on sin; to expose need. The function of the Gospel is to announce that a truly moral one has come, and has come to die for us, the immoral.
Posted by Nick Lannon at 12:53 PM