Archie Manning is a Better Father than You 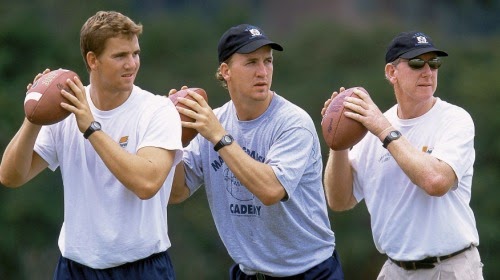 In a recent ESPN documentary (produced in partnership with the Southeastern Athletic Conference), the “first family of football” is profiled. The patriarch is Archie Manning, a break-out star quarterback in 1969 at the University of Mississippi (Ole Miss). He was the quintessential American boy, rising from a small town in Mississippi where he picked cotton for $3 a day, hauled bricks for bricklayers, and never missed a day of Sunday school to a two sport star at Ole Miss dating the homecoming queen. Drafted number two overall by the New Orleans Saints, Archie moved to Louisiana and promptly started a family. His two younger sons (he has three) were both quarterbacks selected number one overall into the NFL and won consecutive (2007 and 2008) Super Bowl MVP trophies. As the documentary notes, all three of these star quarterbacks, Archie, Peyton, and Eli Manning, have penned chapters in The Book of Manning.

Oh, and one more thing: Archie Manning is the best dad in the world.

As a youngster, Archie always wanted more affection from his father than the man seemed willing to give. Football was the love they shared, and the reason that Archie played with such passion. During the summer between his sophomore and junior years at Ole Miss, just when Archie was primed to make the jump from local legend to national superstar, Buddy Manning shot himself in the family home. Archie found him.

Never able to get the love he wanted from his dad, and never having his dad around to revel in his athletic success, Archie pledged to be there for his kids. In the documentary, talking head after talking head waxes rhapsodic about how Archie put his family ahead of football, how despite losing NFL game after NFL game (in 14 NFL seasons, Archie Manning never won more games than he lost), he never came home without the energy to roll around in the yard with his kids. His eldest son, Cooper (who only didn’t become a great professional football player because of  a congenital defect in his spinal cord, discovered in college), says that he never knew whether the Saints had won or lost.

Full of clips from old home moves, The Book of Manning paints Archie as...well, a saint. It’s Archie who takes the hit from fans when Peyton chooses Tennessee over Ole Miss. It’s Archie who has the loving heart-to-heart with Eli when he’s arrested for public intoxication during his freshman year. It’s Archie visible in every photo of Cooper learning to walk again. It’s no coincidence that the film’s title evokes religious literature. Even his losing as a professional adds to the narrative: he’s a martyr, too! He says he doesn’t like the implication that some people make that this was all a plan, that he steered and trained his sons to follow in his football footsteps. In his incredibly winsome drawl, Archie says, “You might can do that…but you wouldn’t end up with much of a father-son relationship. And that’s what I wanted.”

Viewers get to see Cooper, Peyton, and Eli playing (and fighting) in the yard. Archie’s ever-present video camera captures it all. We also see Eli belly-dancing alone in his room and Peyton tangoing in the school musical. There’s even video of Archie taking video! The point that The Book of Manning is trying to make is clear: Archie was (and is) there for his kids. At all times. Peyton is closing in on 40, and nearing the end of what might eventually be considered the greatest quarterbacking career of all time, and he still says that his dad is his best friend.

In the closing moments of the film, Archie tells the story of his father driving him to Ole Miss for the first time, to start his freshman year. When Archie asked his dad what he should study, Buddy Manning told his son that he should study whatever made him happy. “I just want you to be a good guy,” the elder Manning said. Archie closes The Book of Manning with these words: “That’s what I’ve tried to be for my sons. I hope they think I’m a good guy.”

Even in his humility Archie Manning comes off as perfect. It doesn’t come off as false humility either…he seems to be actually hopeful. His friends and family have spent the entire film calling him a good guy -- the best of guys -- and Archie just hopes it’s true.

Archie Manning’s true fatherhood puts mine to shame. I wonder how long it was after the movie ended that I was annoyed or frustrated with my kids. An hour? Five minutes? If they succeed, I’m convinced my kids will do it despite me, not because of me. This is the problem with reducing heroes and martyrs to their allegedly perfect qualities. They cease to inspire and begin to crush. Whatever your poison, be it the faith of Stephen (Acts 7), the charity of Mother Teresa, or the fatherhood of Archie Manning, you die just the same.

Some will watch The Book of Manning and react to it in much the same way they react to many of the Biblical stories: I should be like Archie Manning. I should be like David and Daniel. I should be like Jesus. Unfortunately for those hopeful among us, Jesus has sobering news: you must have righteousness greater than those people! (Matthew 5:20) You’ve got to be perfect! (Matthew 5:48). And under the weight of perfection, no one can stand. Archie’s sons achieved greatness because, among other things, he systematically took the pressure off. Archie wouldn’t even thow the ball with them unless they asked…which, of course, they did. Every day. See Marv Marinovich for a counter-example.

In Christ, the pressure isn’t on to measure up. It’s off; he’s measured up on our behalf. We’ll never be the father that Archie Manning is. But our bumbling and failing fatherhood was taken up to the cross with Jesus and sacrificed there. We can love our children now, freed from the burden of perfection. Jesus has been perfect for us.
Posted by Nick Lannon at 1:02 PM