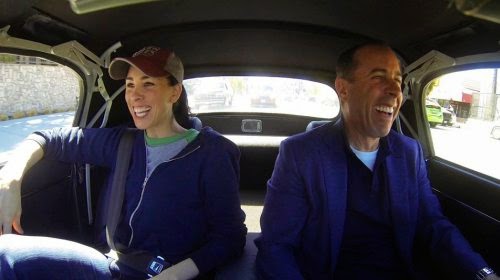 In his funny web series Comedians in Cars Getting Coffee, Jerry Seinfeld picks up a comedian friend in a nice car and they go out for…well, it’s right there in the title. Cameras follow along and record the conversation. The topics are wide-ranging: family, comedy, love, and everything in between. During his conversation with Sarah Silverman, the talk turned to marriage when Silverman said that she didn’t ever see herself getting married because she “doesn’t like quibbling.” This is how Jerry responded:

“This is my reductive story of marriage. It’s one line, and it’s a wife talking to her husband after a party. She says to him, ‘I thought it was a wonderful joke and I’m sure everyone else did, too.’ Obviously, he told a horrible, off-color joke that ruined everyone’s night. It doesn’t matter that he just ruined any chance he’s going to have to advance in his company. She’s not going to tell him the truth.”

“I love that…that sounds like what love is!” responded Silverman.

“It is. You don’t do what’s right. You do what makes the other person feel good,” said Seinfeld.

“You be each other’s cheerleaders,” Silverman suggested.

“Yes!” said Seinfeld. “And the first step to that…is lying.”

“Reductive” usually carries a negative connotation, as in, “well, that’s a reductive (i.e. inaccurately simplistic) way to look at things!” but I don’t think Seinfeld means it that way. It seems that he’s literally suggesting that marriage can be properly reduced to this story. And it’s not just marriage, either: it’s love.

I’ve talked elsewhere about the crippling problem with the Disney film Aladdin: when Aladdin asks the genie to make him a prince, the genie doesn’t really do it. Aladdin, apparently, only appears to be a prince, a status that is taken away from him simply by revealing his humble origins. This despite the fact that when Jafar wishes to become Sultan, to become the most powerful sorcerer in the world, and to become an all-powerful genie, he is actually granted his wishes (the last one to his detriment, of course).

When God pronounces Christians to be righteous on account of Christ, we need the pronouncement to be real. Absolutely everything hinges on this. If we can later be revealed to be the “street rats” that we are and lose our new righteousness, then it has no value at all.

Now, admittedly, there is some power in calling a thing “good” when it isn’t. A husband can certainly feel buoyed by the support of his wife. In fact, I’m willing to bet that most people would agree with Seinfeld here, at least in principle if not in the particulars of the off-color joke story. When our kids do poorly at a piano recital, we’re quick to tell them that they were wonderful. When, at basketball practice, they can neither dribble, pass, nor shoot, we heap on the praise and tell them they’re doing a great job.

This is one of the major distinguishing factors between humans and God: when we do this, we’re lying. When God does it, he’s creating. Now, we may be well-intentioned and we may not be hurting anyone…in fact, there may be some on-the-ground value in telling a loved one something that’s not true. Here’s the key: we need our God to be different.

When God called light out of darkness and separated the waters from the dry land, he spoke a word and these things actually happened. When Jerry’s wife tells him that “it was a wonderful joke” and she’s “sure everyone else” thought so, too, it doesn’t change the effect that the joke had on the party or will have on Jerry’s career. And unless Jerry’s an idiot, he knows that. Jerry might feel better (for a moment) but his state is unchanged. Aladdin felt better while he was Prince Ali Aliababwa, but it didn’t really change who he was. Again, there can be value here…but God can’t be like this. God’s word creates that which it speaks.

God’s words act differently than human words: our words can encourage or discourage, build up or put down, buoy or sink. God’s words create and destroy. God’s first word (the Law) destroys us. It cuts us to the quick and ends our lives. It actually does this. God’s second word is just as powerful. God’s Gospel -- this second word -- “makes all things new” (Revelation 21:5).

When our loved ones tell us that we are good despite our behavior, we thank them for the support and vow to do better next time.

When our God tells us that we are good despite our behavior, we praise his name to the heavens because we know that it is true.
Posted by Nick Lannon at 1:06 PM