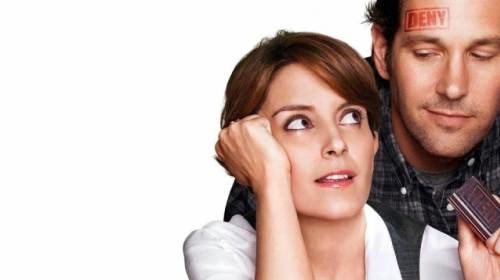 One of the most obvious out-workings of law in our lives can be seen in the parent/child relationship. How many of us have spent our youths either trying to be just like our parents or trying to be their opposite? And then we have kids, and we do the same to them: we either try to give them the wonderful childhoods we had, or we try to spare them from the difficulties we had to endure.

Of course, it’s not always (or really, ever) so black-and-white. Often, we decide that it’s particular things that stay or go in our parenting. For instance, I find myself only allowing my children desserts on Fridays, Saturdays, and Sundays (just like I was as a child) but letting them watch far more television and movies than I ever did.

All of this in an effort to mold our kids, right? How successful are we, though? Check out this clip from the film Admission, in which Paul Rudd complains to Tina Fey that his son, Nelson, isn’t turning out the way he’d hoped.

Rudd is clearly in reaction to his parents’ buttoned-down life. If you’ve seen the entire film, you know that Rudd’s character has lived in multiple third world countries, founded an alternative and experimental high school, and adopted (as a single father) a boy whose family was killed in a Ugandan car accident. He’s itinerant, to say the least. His son, though, rebels against this lifestyle, and is drawn to Fey’s, which he describes (rapturously) as “boring.”

Here’s the thing: In his reaction to what he considers the legalism of his parents (wear this, eat that, go to this school, work at this kind of job), Rudd has created another legalistic environment for his son (don’t wear this, don’t eat that, don’t go to this school or work at this kind of job). It’s unavoidable and, of course, counter-productive: the kid is turning out just like Rudd’s parents!

Paul Zahl talks about this phenomenon in terms of “preppies” and “hippies,” which is perhaps the perfect lens for this film. Paul Rudd’s parents were “preppies.” He’s a “hippie.” But notice: his reaction to his parents’ lifestyle is just as bound to it as if he were a blazer-wearing, bridge-playing preppy himself! Whether we fight tooth and nail against the law we were brought up with or obey it to the letter, we are under its power. And we pass that law on to our kids, either by denial or assent.

“Yes,” we must say, “Certainly, you are. I am, too.” We need to confess to ourselves and our kids that we are messing up and do what Rudd does later in the film: ask for forgiveness.

Law is merciless…it crushes both our attempts to appease it and our attempts to escape it. Thankfully, the Gospel describes a way to freedom: the Law crushes Another. “Surely he has borne our griefs and carried our sorrows; yet we esteemed him stricken, smitten by God, and afflicted. But he was pierced for our transgressions; he was crushed for our iniquities; upon him was the chastisement that brought us peace, and with his wounds we are healed” (Isaiah 53:4-5).

As parents, words like “grief” and “sorrow” are familiar. Words like “peace” and “healing” are so gloriously foreign that we barely comprehend their meaning. Perhaps there is no person more in need of substitutionary atonement than a parent with a severely difficult child.

But there is substitution! The weight of the law has been put on another! Our failures as parents have been carried and nailed to the cross. The laws we place on ourselves and create for our kids are taken up by Christ and defeated forever. The only thing that can save us -- the intervention of a substitute -- has actually taken place. Our efforts to live up to the laws in our lives, and our efforts to subvert them, have only led to grief and sorrow. Christ alone is the source of  peace and healing.
Posted by Nick Lannon at 1:10 PM