Does The Prince of Egypt Have Enough Faith? 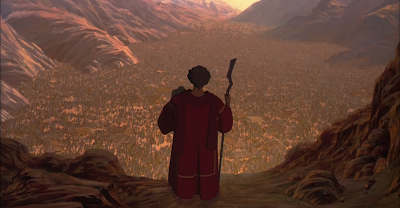 As both a person who loves movies and the father of three young children, I find myself watching children’s movies at an alarming rate. We have more films than the average house, I’m sure, but my kids consume them voraciously, and in cycles. Recently, we were in a NeverEnding Story cycle, and probably watched that movie a dozen times in the span of a few weeks (and for a house that only allows the kids to watch movies on Friday, Saturday, and Sunday, that’s no mean feat). Each movie, then, worms its way into my brain and sets up camp there, as I’m obliged to dig more deeply into them (to maintain my sanity) than would a normal viewer. This digging always raises questions. For instance, if Falcor is a dragon, why does he look so much like a dog? As I’ve written elsewhere, why is it that the plot of Aladdin makes no sense at all?

Recently, we’ve been watching The Prince of Egypt, Steven Spielberg’s pretty wonderful (and Biblically faithful) retelling of the Exodus story. The film posits a powerful God who powerfully acts on behalf of his oppressed people. There is no sugar-coating of the plagues (Egypt’s losing of its firstborn sons is an especially tragic scene) or of the bickering of the Israelites. Even Moses’ flawed character is laid bare for the viewing audience to see. God is portrayed as acting in strength while his people can only offer their weakness.

So why is it that the film’s most famous song, “When You Believe,” has such terrible lyrics? Here’s the chorus, and the gorgeous video version featuring Whitney Houston and Mariah Carey:

May I suggest a different lyric? There must be miracles, precisely because we don’t believe. We, by the word's very definition, don’t “achieve” miracles, they are the astounding direct intervention of God into our world. In the context of the Exodus story, the written lyrics for “When You Believe” are all the more ridiculous: the last miracle we can achieve is our own deliverance, our own salvation. In fact, it is our reliance on ourselves and our achievements that lands us in bondage in the first place!

The Israelites couldn’t have thought for a moment that their salvation was wrought by their own achievements. They’d heard about the burning bush, they’d seen the plagues, they’d followed pillars of cloud and fire, and they’d walked across the dry floor of a divided sea.

There were miracles, but not because the people believed. The burning bush had to convince Moses that he was God’s chosen leader for this mission! The miracle created belief, not the other way around. The same is true of us: The miracle of God’s love, a love that comes to us before we deserve it -- and, in fact, when we are on the run from God -- and expects nothing in return, creates belief, it does not depend on it.

And so, despite the beauty with which Mariah and Whitney sing it, know that their message is false, and that that’s good news. Even when we don’t believe, miracles happen, and we are saved. Praise God.
Posted by Nick Lannon at 9:03 AM