Super and the "Heroic" Law 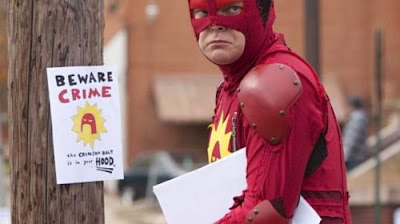 In James Gunn’s low-budget cringe-comedy Super, Rainn Wilson plays a sad-sack fry cook who loses his wife to a drug dealer and, in response, becomes the Crimson Bolt, a “superhero” who cracks criminals over the head with a lug wrench.

The problem with the Crimson Bolt is the same as the problem with the Law of God: there’s no wiggle room. Sure, he cracks child molesters, thieves, and drug dealers with his wrench…but he also goes after lesser violators, like line-cutters. “You don't butt in line! You don't sell drugs! You don't molest little children! You don't profit off the misery of others! The rules were set a long time ago! They don't change!” he shouts as he bashes in the head of his final victim. And truly, that’s the proper word. Because even though the Crimson Bolt is a hero in his own eyes, to the rest of the world he’s a violent lunatic, leaving a trail of victims -- not perpetrators -- in his wake.

Similarly, we are victims of the Law.

We like the Law when it exposes the sins of others, the “bad” people who enable us to look at ourselves as “better than” or “less depraved than” the rest of the world. The Law is attractive in the same way that the Crimson Bolt (or at least the idea of super heroism) is attractive. Listen to Constable Nicholas Angel (Simon Pegg in the film Hot Fuzz) describe why he became a police officer:

To illustrate this problem, Martin Luther famously used the image of a kitten and a lion. We think that the Law is a kitten, something cute and easily controllable. So we let it run free in our lives. We let the Crimson Bolt defend us. But once it’s out of the cage, we realize that the Law is a lion. We can’t control it, and it quickly turns on us. The Crimson Bolt begins transitioning from bashing drug dealers and child molesters (which we can get behind) and starts treating line-butters no less harshly. This, of course, is a problem for us: we don’t know just how good we have to be to avoid a skull-crushing.

Robin Hood stole from the rich (“bad”) and gave to the poor (“good”). We never hear exactly where he drew that line. Superheroes protect the good guys by defeating the bad guys. In most films, there’s a pretty clear distinction between the two. Not in Super, and not in real life. In the real world, the lines of demarcation between “good” and “bad” are a little squirrelly.

Actually, it’s worse than that: in the real world, “bad” is the norm, and “good” looks something like miraculous intervention. As Paul says in Romans 3: “None is righteous, no, not one; no one understands; no one seeks for God. All have turned aside; together they have become worthless; no one does good, not even one”(v.10-12).

In real life everyone gets bashed with the Crimson Bolt’s wrench. In other words, the bad news is worse than we thought. We knew the world was a bad place, but we thought that “they” were responsible. You know, the bad guys. We were counting on superheroes, like Jesus, to keep us safe, to protect the good guys from the bad guys.

But Jesus is a different kind of superhero: He comes to save the bad guys. “God shows his love for us in that while we were still sinners, Christ died for us” (Romans 5:8). It is while we are God’s enemies -- while we’re the bad guys! -- (Romans 5:10) that this unique superhero comes and, rather than bashing us over the head with more “proper and righteous” law, instead accepts the cranial wrench-bashing for us.

The Good News is only so good because the bad news is so bad: we’re the bad guys. You, me, and everyone we know who is “better than” and “less depraved than” other people. We deserve the Crimson Bolt’s wrench. Instead, we get the comforting words of a savior: “I have come not to call the righteous, but sinners.”
Posted by Nick Lannon at 9:09 AM