Robo Cop and the Illusion of Free Will 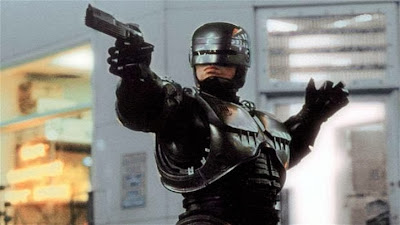 Apparently, someone thought it was a good idea to remake RoboCop. To each his own, I suppose. But for the record, Peter Weller is RoboCop. So it has been; so it shall ever be. As if remaking a classic Paul Verhoeven-helmed social commentary wasn’t a touchy enough subject, the filmmakers have decided to involve a discussion of free will, the touchiest of the touchy subjects.


To be fair, it’s not “free will” itself that is touchy. No, in fact, it’s a sacred cow. What’s touchy is any implication that free will might be an “illusion” or that the will might not actually be so free…that’ll get you into trouble.

As Gary Oldman says in the preview (and gosh there are a lot of slumming stars in this one: Oldman, Keaton, Jackson…), the Robosuit is apparently outfitted with a function to trick its wearer (Joel Kinnaman) into thinking that he’s making free decisions, while all the while doing the work for him. Presumably, when one sees the entire film (which one probably won’t), this will be said to have been done to keep Kinnaman’s mind from rejecting the Robosuit, so dearly do we cling to our human freedom.

Later in the preview, the inevitable happens: Kinnaman’s “human elements” begin to “override the system’s priorities.” His “free will” will be shown to be so strong, in other words, that even “4th degree burns” (do those exist?) and a suspiciously flexible cyborg suit can’t keep it down.

At the beginning of this trailer, I thought that we might get an interesting commentary on human freedom, and the potential lack thereof. Instead, by the end, it was clear that this RoboCop will be yet another paean to human freedom and our ability to overcome any obstacle in our path. All RoboCop must do is let his humanity out to -- to borrow a phrase -- be all he can be.

Let me make a dangerous suggestion: the fact that we aren’t free is good news, not bad.

When we human exercise our freedom, we turn our world (both public and personal) into the post-apocalyptic wasteland of RoboCop. Drones, explosions, and nefarious gangsters pulling futuristic guns on even more futuristic officers of the law. We act in our own self-interest, putting the needs of others far behind our own, and we endeavor to solve our own problems, whenever they occur.

In short, to the extent that we believe in our freedom, we never acknowledge our need for a savior.

“Who, us?” we’d say. “No need! Go help someone who really needs it. I might be down and out for a moment, but I’m not a prisoner! I’m not a slave! I’ll be fine in just a bit…I’ll send you a postcard.”

Jesus, however, didn’t come for the free. He came to proclaim release to the captives (Luke 4:18). We aren’t free to choose Jesus; he chooses us (John 15:16). This is good news! This is the Good News! We desperately need the system’s priorities to stay in place precisely because of our human elements!

Our system is a gracious one: a God who bridges a chasm between himself and us. As we run from him, as we rebel, and as we exert our “free” will, God leaves the ninety-nine sheep who don’t need rescuing to come find us -- the lost one--, gather us up in his arms, and carry us home.
Posted by Nick Lannon at 8:58 AM