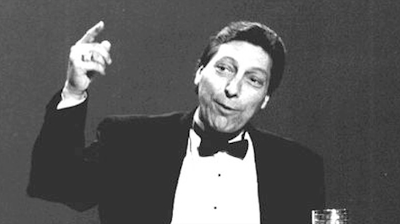 Jim Valvano (most likely known to non-sports fans as the namesake of the Jimmy V Foundation, a cancer research supporter which has given away hundreds of millions of dollars to fight the disease) was the subject of the latest ESPN 30-for-30 documentary, "Survive and Advance," which premiered on Sunday night. The doc is about the unlikely path-to-a-championship of the 1983 North Carolina State Wolfpack, coached by Valvano, which included nine consecutive must-win games, many of which came down to the final seconds. The team's run (the final basket in the championship game was recognized by Sports Illustrated and ESPN as the "greatest moment in the history of college basketball) was fascinating, but also typical, in a Disney film sort of way. It played out in exactly the way Michael Eisner might have recommended. What's interesting to me is how the documentary treats Valvano's illness and eventual death.

Naturally, Valvano's diagnosis, foundation-founding, and death are a major part of this story. Jonathan Hock, the director, has said that one of the things that interested him most about this story was that it was a wonderful tale of triumph after triumph being told about the life of "a doomed man."

Interviewee after interviewee (Valvano's players, wife, and friends, which include such luminaries as Mike Krzyzewski, Dick Vitale and Sonny Vaccaro) told of how, when Valvano was diagnosed with cancer, they thought -- no, they assumed -- that he'd "beat it." This is the language we use with cancer: the language of victory. I saw a post on Facebook recently in which a young boy wanted 100,000 "likes" because he'd "beaten" cancer. Valvano's friends all spoke of being shocked as he became sicker, and ultimately astonished at his death. They'd thought he would win.

Even Jim Valvano died. The consummate winner didn't win. The Facebook boy might have beaten cancer, but he hasn't beaten death. No one has, or ever will. Well, except this one guy.

As humans, our most desperate wish is to win. We try to win everything, up to and including the ultimate contest: us against our own deaths. The profundity of the cross is that it looks death in the face and confronts it directly. The cross is the end of the human contest. We lose. Even Jim Valvano lost. No one "survives and advances."