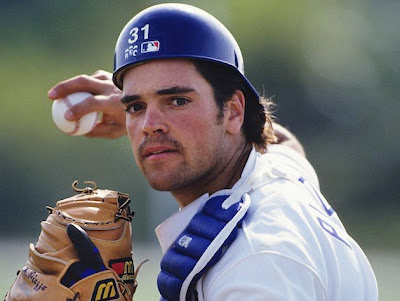 Mike Piazza's autobiography is called Long Shot, and reviewer Rob Neyer thinks it's a long shot that anyone will really like the book. Neyer does admit that the book "semi-obsessed" him for a week. He claims to be unsure of the reason, despite the well-written nature of the piece, but suspects that it has something to do with the book being "a case study in narcissism."

Neyer writes of Piazza's book, before saying that he "can't really recommend [it] to readers":


He really wants you to think he was a great hitter. Piazza hit 427 home runs in his career, and he mentions something like a hundred of them. He's got the record for the most home runs by a catcher. And right after the section where he talks about breaking the old record, he launches into an extended discourse about what a great player he was. Like he's trying to convince us, yes ... but also as if maybe he's trying to convince himself.

He really wants us to think...that beautiful women -- Playboy models mostly, and Baywatch actresses -- find him incredibly appealing. I wish the otherwise-estimable index listed mentions of "Playmate", "Baywatch", and "actress". But there are a lot of them in there. And when relating how he met his future wife Alicia, he simply describes her as "a Baywatch actress, and a former playmate, to boot."

The estimable Paul Zahl once scoffed in a seminary class at the idea that there should be such a thing as "Narcissistic Personality Disorder." His claim was that, if such a thing did exist, every human being should be immediately diagnosed with it. If I discovered that Playmates and Baywatch actresses found me attractive, I'd rent ad space on the side of Mt. Everest to announce it to the world. If I'd hit 427 home runs in a successful major league career, I might write an autobiography for each one of them. Of course, these things haven't happened to me. But that doesn't stop me from desperately wanting you to think that I'm a good writer, a deep thinker, funny, and, you know...maybe at least a little attractive? No? Not even a little? Okay, let's move on.

We find the narcissism of others uncomfortable because we fear that it might shine a light on our own, like Ed Norton in Fight Club, who worries that Helena Bonham Carter's support-group fakery will out him as a faker, too. Underneath (but not too far underneath!) it all, we have a caustic narcissist who champs at the bit of social convention. We know it's not okay to appear narcissistic, so we keep the little guy chained up.

Better, though, to call a thing what it is. We desperately search for the affirmation of others (whether for our athletic prowess, physical attractiveness (still nothing?), or devastating wit) due to our (usually appropriate) fear that our weakness, ugliness, and banality are obvious to all. In other words, we are sinners looking for someone -- anyone! -- to tell us that we're not. We're looking for someone to save us without our having to die. As billionaire and amateur theologian Dan Gilbert once noted, it doesn't work that way. For resurrection to occur, there must first be a death. We must admit to our faults, allow Jesus to put the narcissist inside us beside him on the cross, and be raised to a new life of peace.

You know, maybe it's in that new life that a Playmate will find me attractive.
Posted by Nick Lannon at 8:30 AM