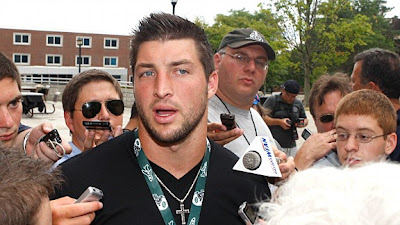 There appears to be a consensus forming that Tim Tebow's career as a football player is over. This, in itself, is a strange phenomenon, since he has a winning record as a starting quarterback in the NFL, a relatively rare achievement for a young player who came into the league with questionable talent and playing for a mediocre (at best) team. Heck, it's rare for any young quarterback to come out of the gate with a winning record. In any  event, people have begun to speculate about what Tim Tebow might do next, now that he has no future in sports proper.

As has been well-reported in this (and every single other) space, Tim Tebow is a no-foolin' Christian, and one of the career options that is open to him is Mainstay on the Inspirational/Motivational Public Speaker Circuit. Tebow could likely earn his weight in gold dubloons each year, speaking to one packed stadium of Christians after another. But it might not be that easy.

As ESPN.com's LZ Granderson says in his piece on this recent Tebow miasma, "Tim Tebow simply can't win." He's criticized for agreeing to speak and then criticized for what he doesn't say. We've touched on this before in relation to LeBron James and his "unwinnable" All-Star game last year. This Tebow story makes it clear: it is life itself that is the un-winnable game.

Jesus' Sermon on the Mount (as a window into his larger worldview) makes life un-winnable. We think we can defeat adultery, but must admit defeat to lust. We think we can defeat murder, but must admit defeat to anger. We think we can defeat the inability to love our neighbor, but must admit defeat to the requirement to love our enemies. God's first word (law, requirement, standard) is a defeating word. It shows us that no matter which way we go, left or right, toward First Baptist Church or away from it, we can never truly do what Jesus would do. WWJD is too tall an order. We must rely on God's final word (grace, love, forgiveness), which is an enlivening word. It's even better to say that God's word of law is a killing word. It destroys us, no matter what we do. God's word of grace, though, is a resurrecting word, bringing life out of death and glory out of defeat.
Posted by Nick Lannon at 8:30 AM