From the Archive: The Fight Club Gospel: Hitting Bottom 
This is a conversion experience of the first order. This is what we might call "the cross side" of Christianity. Jesus said that if any wanted to become his followers, they had to deny themselves, take up their cross and follow him (Matt 16:24). We think that this means discipleship is a hard road, with a heavy burden to bear. We forget that people who carry crosses always end up in the same place: on them. Brad Pitt says, "First you have to give up. You have to know...not fear...know, that someday, you're gonna die." This is the first step to freedom: To know that the road of the cross leads to Calvary. He goes on: "It's only after we've lost everything that we're free to do anything." 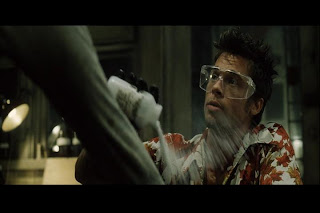 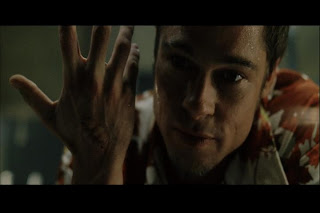 Like Thomas, converted by the wounds of the risen Christ, Norton is converted by Brad Pitt's wounds. He has passed this test. He has carried this cross. Jesus Christ has borne his cross so that death can be a beginning, rather than an end, for us. He died so that we might live. He died, and we died with him (Gal 2:20), so that now we can be free. We have to know...not suspect...know, the reality of the cross. It is only then that we can really be.
Posted by Nick Lannon at 8:30 AM