A Useful Law or: How I Got in a Fistfight with a 50-Year-Old Man 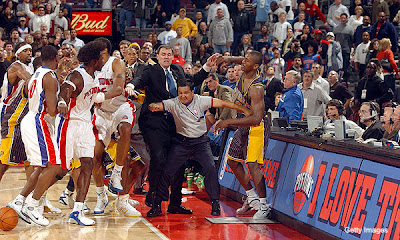 This happened on Monday. Seriously. On Monday I got in a fistfight with a 50-year-old man. I'm 34. I should note immediately, and in my own defense, that it was a really one-sided fistfight, in that he landed both the punches he threw and that I neither threw nor landed a single punch. He won on all cards. Except that, of course, he didn't.

Here's how it went down.

We were playing pick-up basketball, and an out-of-bounds call was disputed. Voices got raised, as is par for the proverbial course (court?). I thought he'd touched the ball last, and he claimed that he hadn't. We went back and forth a couple of times, yelling, but eventually, inertia led his team to claim the ball. In pick-up games, you check the ball in (pass it to your defender, who passes it back to you when his team is set defensively) rather than take the ball out-of-bounds. This man (let's call him Mike...it's his real name) was the checker, and I was his defender. We were both still a little (a lot) hot under the collar from our dispute, and so when he checked me the ball, he put a little extra heat on the pass. When I checked it back, I returned the favor. Apparently, that was over the line.

He came at me with some serious hatred in his eyes. Before I could really understand what was happening, he'd landed a left-handed jab to my chest. I'm a pretty big guy (6'6", 240), so I didn't move. I said, "Are you joking?" In an apparent effort to show me that, no, he was not joking, Mike landed another jab, again with the left, to the same spot on my chest. Again, I didn't move. "You've got to be kidding me!" I said, too stunned to do anything in response but stand there gaping at him. This was a 50-year-old man! He's screaming at me about how he's "not [my] boy," and punching me twice in the chest...it was surreal.

An hour later, long after other players had intervened, he'd left the game and playing continued, Mike came up to me and apologized. He said, "I lost control." No kidding. 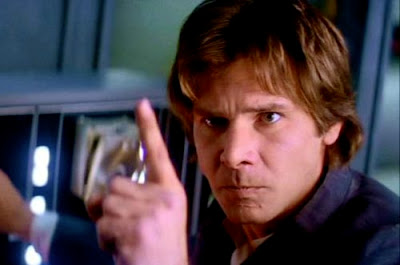 Now, clearly, we handled the situation very differently, and the way we handled it is a nice window into what theologians have called the two "uses" of the law. Let's say that the law says, "Don't attack another person." You know, just for the sake of discussion. The "first use of the law" (or, the "civil use") simply states that if you do go around attacking people, no one will like you, you'll have to explain your embarrassing actions to your 14-year-old son who was in the gym, and, eventually, you might even get yourself arrested. Good reasons not to attack someone, right? The "second use of the law" (or, the "theological use"), though, says something deeper, something more like, "If you attack people, you have broken God's law, and are liable to His judgment."

Here's the profound thing: it's only under the first use of the law that there's a difference between Mike and me. No one would disagree that it's better not go around punching people, even if they deserve it (which I didn't...I mean, the ball was out on him, as anyone with a brain could see!). But the second use of the law is the great leveler. Listen to Jesus in Matthew 5:

Mike and I were both angry with each other. Each of our checks had some extra zest on them. I certainly thought him a fool. We are each, in the eyes of God, liable to "the hell of fire." In other words, as it relates to our standing before a holy God, Mike and I are both in desperate need of a savior, even though he "lost control," and I only stood there, dumbfounded. I'm glad I didn't punch him, but I can't count myself as righteous because of it.

We who are angry, whether we lose control or not, whether we punch or not, can count ourselves as righteous only because of  the gift of another, the perfect righteousness of our savior. That said, don't get in fistfights with 50-year-old men. You could end up with a tiny bruise.
Posted by Nick Lannon at 8:30 AM