From the Archive: Crushed: The (Totally Predictable) Story of Todd Marinovich 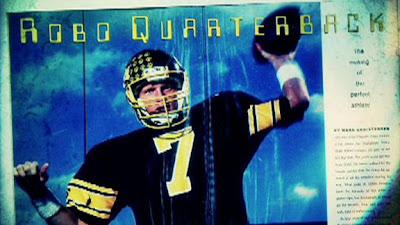 His father, Marv, had been a star football player at USC and had played in the NFL with the Oakland Raiders. As he played, he sometimes wondered how good he could have been if he’d been devoted to the sport from a younger age. When he had a son, he decided to find out. The story of Todd Marinovich’s childhood is well-worn territory. Magazine articles from the time (like Sports Illustrated’s “Robo QB”) and the recent ESPN documentary The Marinovich Project detail  an unparalleled training regimen. During Todd’s first month of life, Marv instituted a stretching regimen, flexing his infant son’s hamstrings and quads. From the time Todd could hold things, he was holding a football. As soon as he could stand, he was standing in cleats. Everything, from his diet (no sugar or processed foods, period) to his time (no vacations or after-school outings with friends — his mother had to literally kidnap him for a weekend away…she knew if she asked Marv, he would have said no), was engineered by his father to give him the tools he would need to be a great quarterback. (Many of the sometimes grisly details can be found in a Psychology Today blog post called “An Interesting Weekend on the Perils of Building Better Humans.”)

It worked…except that it didn’t. Marinovich began smoking marijuana in high school, saying that it, “gave me a buffer from a life that was too intense.” He went to USC as a blue-chip recruit and savior of the program. He was…except that he wasn’t. During his sophomore year he was benched for thinking he knew better than the coach…and for getting into alcohol and harder drugs. Marv is quoted in the documentary as saying that “when he was at home, things were pretty well structured,” lamenting the fact of his son’s rebellion at school. But in the next breath, he admits that things were “…maybe too structured.” Todd left school after his sophomore season, but was arrested on drug charges (cocaine this time) before the NFL draft. He was nonetheless drafted by the Los Angeles (at the time) Raiders. Drug problems continued to plague him. Howie Long, a then-teammate and current NFL analyst, suggests that “the pressure was on him from an early age, and I think that probably – in some ways – wore him down.” Wore him down indeed. Inside of two seasons in the NFL, Marinovich was, by his own admission, “done with football.” The clearest thought in his head was a simple one: “I don’t want to be Todd Marinovich.” He “wanted to get as far away from football as possible.” The law brought only death (Romans 7:10). The regimen that was intended to make him a success only brought him torment and failure. A reporter covering Todd’s high school career cautioned that “you can’t build a jailhouse of achievement for your son or daughter and not expect a really bad result.” The law, the rules, the requirement…these things are the jailhouse of achievement that either others construct for us or that we construct for ourselves. There is no way out of this jailhouse but through capital punishment.

Happily, Marv Marinovich is not the single-minded monster of destruction that the disembodied Law is. When Todd was in the throes of his drug addiction and needed help, help that ranged from being bailed out of jail to being physically held and comforted while going through withdrawals, Marv was there. Marv, in this story, was able, perhaps miraculously, to be Grace to his son, even after being the Law. Today, they have a loving and close relationship. Todd is now clean, sober, and an artist, whose work can be viewed at ToddMarinovich.com.
Posted by Nick Lannon at 8:30 AM