The Fosbury Flop (and the High Bar of the Law) 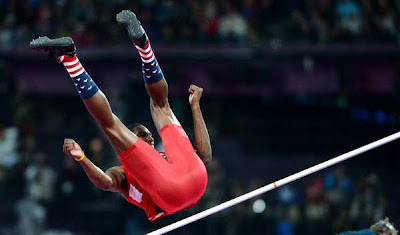 It’s autumn now, which means that everyone can begin dreading stewardship season at church again. Preachers dread preaching it, congregants dread hearing about it, and everyone dreads being told how it all turned out. We’d all much rather think happier thoughts, like, perhaps, thoughts about the Fosbury Flop.

Dick Fosbury invented his “flop” (or at least brought it to the world’s attention) in the 1968 Summer Olympics.  It involves jumping over the high jump bar backwards, and landing on your back. It revolutionized the sport immediately, initiating an extended season of new world records. It was long entrenched as the only legitimate method of clearing a high jump bar by the time I began high jumping, in 1996.

I was a good high school high jumper, which is to say that I had no prayer of high jumping on the college level. I qualified for the regional meet, and could jump my height (a traditional benchmark). This meant that, in the main, I won or placed in most of the district and one-on-one meets in which we participated. Being among the best came with some perks. A good high jumper can use strategy to jump higher in meets or to psych out opponents…but sometimes, this strategy comes back to bite you.

Since the final standings of a high jump competition are determined simply by ranking the highest height cleared, jumpers can choose to pass on attempting lower heights, saving their legs and energy for higher jumps. This can also intimidate other jumpers, as in, “I’m nearing my personal best and that guy hasn’t even started yet!” I would often smugly pass lower heights, hoping my rattled opponents would fault out of the competition.

This is the mindset that a rich young man had when Jesus told him that, to be saved, he needed to obey the law: “all these [laws] I have kept since I was a boy” (Mark 10:20). “That’s child’s play!” he might as well have been saying, “I don’t even need to try!” In other words, he’s saving himself for the tougher jumps, the higher heights, the more challenging feats of obedience.

Then Jesus raises the bar.

At one district meet, I passed height after height, drunk on the scared looks I was getting from my inferior competitors. When I finally deigned to take off my sweats, a funny thing happened: I couldn’t clear the bar. Well, it was funny to everyone but me. There’s nothing quite so mockable as a high jumper who finishes a competition with no height cleared and in last place; especially one who has been so visibly unconcerned about lower heights.

When the rich young man comes face to face with the high bar of Jesus’ law, that to be saved he must sell all he has, give the proceeds to the poor, and follow Jesus, he goes away sad, “for he had many possessions” (Mark 10:22). He’s come face to face with a bar that he can’t clear.

As “stewardship” becomes a topic of conversation in our churches, let’s remember how high the bar is: everything you own. We consistently believe that the bar is low enough to clear: 10%. So we wave dismissively: give us a challenge. We tithe, and think ourselves righteous. But when Jesus raises the bar, we realize that the standard is too high for us, that the bar has been placed far above our heads. The standard is not 10%, 20%, or even 50%…it’s everything.

Jesus raises the bar for a specific purpose: We need to be brought into touch with our failures in order to recognize our need for a savior. The rich young man is confident in his high jumping ability. He could jump that high as a child! So he must be shown his need. Jesus knows that the first word of God (the law) must be understood in all its destructive power before the second word of God (the Gospel) can be accepted.

When the disciples see how this interaction ends, they ask, “who then can be saved?”  Jesus answers with God’s two words: First, he destroys: “with man it is impossible.” Second, he comforts: “But not with God. With God all things are possible.”

Who can be a good steward? No one. With man it is impossible. But not with God. With God, we have been called good stewards, in Christ, no matter how egregiously we fail and crash once more into the high jump bar. Where the rich young man went away sad, crushed by the law, we can stay, acknowledge our failure, and be saved.