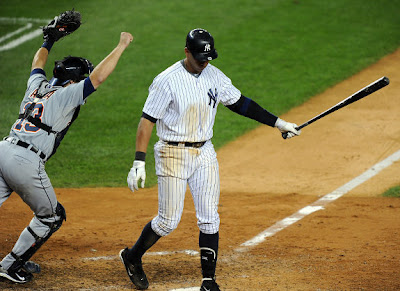 The Yankees are going down in flames, and they're doing it in a way that no one expected: the Bronx Bombers can't hit!  Long known for using their high-priced murderer's row offense to make up for shaky starting pitching, the 2012 Yankees and losing close, low-scoring games because they can't score any runs.  Alex Rodriguez takes most of the blame because of his overwhelming contract and suspicious, mirror-self kissing ways, but he doesn't even have the lowest postseason batting average on the team.  Robinson Cano, a perennial MVP candidate and fan favorite, has not had a hit yet in his last 29 at-bats, setting an all-time (in a sport that's been around and keeping stats since the 19th century!) record for postseason futility. 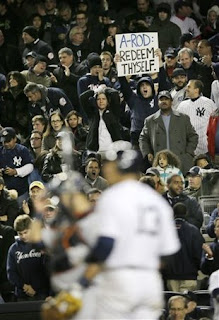 Yankees fans, used to cheering the long ball, are growing frustrated.  A few days ago, a fan took the time to paint the sign at left and bring it to The House That Ruth Built (Yankee Stadium).  Big thanks to Dan Siedell over at LIBERATE for this picture, and be sure to check out his amazing thoughts on the intersection between the Gospel and art HERE. How do you think A-Rod feels, looking up into the stands and seeing this sign?  I know how I would feel!  I'd want to jump over the wall, clamber up to that fan's row, and scream in his face, "Look, I'm TRYING to get hits! Don't you think I'd be playing better if it was up to me? Don't you think I'd redeem myself if I could?"

Self-redemption is every human being's fondest hope, but it's also our impossible dream. In sports, people always talk about the disaster that can come from trying to make up for failures on the next play. Coaches always chide athletes to have a short memory; if you go into the next play, the next match, or the next game trying to make up for the mistakes of the previous one, you'll usually only compound them. The assertion is simple: we can't redeem ourselves.

The parallel to Christianity here is so obvious that it probably doesn't even need to be drawn. Humans refuse to believe that we are beyond helping ourselves; in fact we often protest that God only helps those who do!  We dearly wish that we could, ourselves, atone for the mistakes of the past, and say "Thanks but no thanks" to the offered atoning death of another.  We're uncomfortable owing someone so much.

We only acknowledge our need for a savior when the idol of self-salvation is unceremoniously ripped from our grasp. Alex Rodriguez, and the rest of Yankees, are almost there. One suspects that last night's Justin Verlander three hit annihilation will serve as the Hammer of God, finally convincing the Yankees, and their fans, that a savior from within is not enough.
Posted by Nick Lannon at 8:30 AM