I Would Never Do That: Denial and Cheering a Downed Quarterback

On Sunday, the crowd at Kansas City's Arrowhead Stadium was getting tired of quarterback Matt Cassel's poor play, so they began to chant backup quarterback Brady Quinn's name. As the saying goes, the most popular player on the team is the backup quarterback. For this to be true of a player like Brady Quinn can only stand either as a testament to the putridity of Cassel's performance or a case of collective amnesia afflicting the stadium. Chanting the name of the backup quarterback, of course, isn't rare (see: Tebow, Tim), but what is rare is what happened next.

In the fourth quarter, Cassel had to leave the game with a head injury. As Cassel lay on the turf after the hit that injured him, his home crowd seemed to cheer in relief. "Finally! No more Cassel!" the cheer seemed to say. The stadium certainly cheered as Quinn entered the game. Here is Chief's lineman Eric Winston reacting strongly after the game:

On yesterday's Pardon the Interruption, Tony Kornheiser suggested that if this happened (there's some disagreement about whether the cheering started when Cassel went down or if it began as he made his way off the field; it is common to cheer injured players leaving the field, as a way to let them know that the fans are behind them) it was illustrative of the "darkest part of human nature." Interestingly, both Kornheiser and his co-host Michael Wilbon expressed surprise that this kind of thing could happen in Kansas City, traditionally believed to be home to one of the nicest and most loyal fanbases in the NFL.

As they expressed their surprise, I couldn't help but think of the similar surprise that Christians express when their heroes falter. Ted Haggard comes immediately to mind. "Really?" we exclaim. "Him? How could someone who seemed so faithful fall so far?" I've heard the Christian life illustrated as the climbing of a ladder, and I'm willing to accept this image if we can agree that the ladder is infinitely tall and that each rung we've climbed immediately disappears beneath us. In other words, we're always on the last rung, hanging on for dear life. 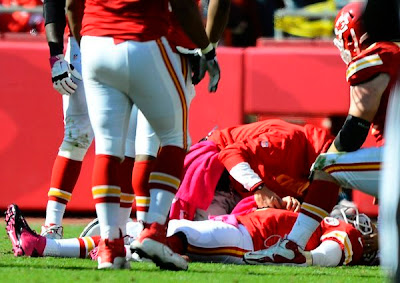 The impulse that led Kornheiser and Wilbon to assume that the denizens of Kansas City were above cheering a quarterback's injury is the same impulse that allows us to convince ourselves that we (and other, similarly advanced, Christians) would be above that kind of thing, too. It only takes the right situation, however, to show us that our hold on that ladder was tenuous at best and that our falls can be as spectacular as anyone else's.

The tragic irony of the ladder illustration is, of course, Jesus' stated intention to save those lying in a crumpled heap at the bottom of it while having nothing to do with those proficiently climbing. The longer we continue to convince ourselves (falsely) that we are in good standing and out of trouble, the further we remove ourselves from the outreached hand of our savior.
Posted by Nick Lannon at 8:30 AM