Olympic Stars -- They're Just Like Us! (In That They Usually Lose)

It has been noted that there are 302 gold medals up for grabs at this year's London Olympic Games (or, as Bob Costas insists on calling them, The Games of the Thirtieth Olympiad), which might sound like a lot until you account for the 10,490 athletes bent on attaining them. What this means, of course, is that most competitors come away from the Olympics as losers. Now, before you stop me and say, "Hey, silver medals aren't too shabby, and certainly those who win them aren't losers!", I submit exhibit A: the glowering Russian gymnastics team. Nary a smile cracked their lips...until, that is, Gabby Douglas made a costly error on the uneven bars, clearing the way for Aliya Mustafina to win a gold medal. I don't begrudge the Russian gymnasts their desire for gold...I'd be the same way and would happily celebrate a competitor's mistake (it is a competition, after all), I only bring it up to note that second place, for many of these athletes, is still losing.

But still, the vast majority leave with no medals at all.

In a recent interview with SI.com, graphic artist Sarnath Banerjee was interviewed about an extensive art installation in and around Olympic venues in East London. The installations feature depictions of Olympic failure and self-doubt, and was funded by the Frieze Foundation. The highlights of the interview are actually the images of Banerjee's billboards: 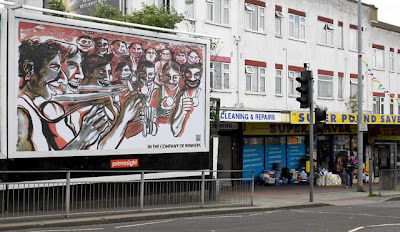 (the caption here is: "In the company of winners") 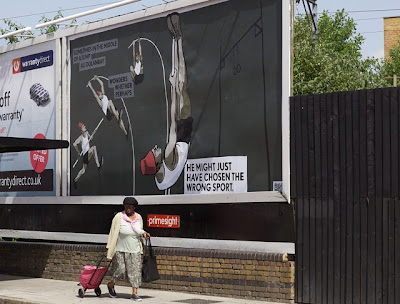 ("Sometimes, in the middle of a jump, Au Dolanbay wonders whether,
perhaps, he might just have chosen the wrong sport.")
Consider this additional juxtaposition: Though interested in, and identifying with, the losers, Banerjee admits that, like the rest of us, when he watches the Olypmics, he'll be "focused on winners." This is so typical of us humans: we identify profoundly with losers (we are them!) but we want desperately to identify with winners (we could be them!). It takes an honest man to admit that though he's fascinated by losing (and is an athletic loser himself), he'll be focused on the winners at these Games.

Banerjee is able to bring to vivid portrayal the self-doubt and fear that all of us face, whether we engage in competitive athletics or not. Winning is fleeting...just ask Bruce Jenner. Losing, though, is a thing to be lived with, felt, and sublimated. After all, it's not until we admit that we're losers that we can reach out for help.
Posted by Nick Lannon at 8:30 AM