But How Does Your Embarrassing and Excruciating Loss Make You FEEL? The Pros and Cons of Olympic Sideline "Reporting" 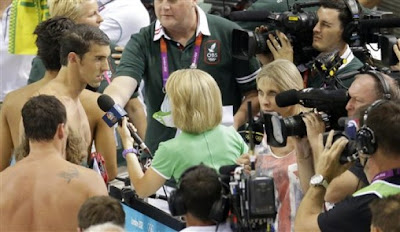 Sideline reporting is a touchy art. Long the province (or ghetto) of beautiful female reporters frozen out of more high-profile jobs, the sidelines of sporting events can (and should) offer closer access to the immediate stories of the contest than that offered by the broadcast booth. Too often, however, sideline reporters satisfy themselves with "human interest" stories about the "feelings" of the athletes either before or after they compete. This is especially true of the Olympics.

The best examples of sideline reporting are usually in basketball and football (the American kind) wherein reporters can often be privy to exchanges between players and coaches (and coaches and medical staff) and communicate what they overhear to the viewer. Of course, they usually don't, because the other team has representatives watching the broadcast, too, and would be interested to know any strategy (or injury news) that the sideline reporter has come up with. This aside, sometimes we viewers learn something valuable.

In the Olympics, this is next to impossible. I'm thinking specifically of gymnastics, track, and swimming, where there is no real strategy (Don't fall! Run hard! Swim fast!) and athletes are largely unavailable before and while they perform. Questions must be asked after the athlete completes the competition.

I have long loathed these interviews, commenting after a recent example: "Can we please stop asking athletes how they feel when they can't even breathe yet? News flash: they feel like crap, especially if they've lost!" Interviewers rarely ask technical questions, which might shed light on WHY an athlete fell short (What happened at the turn? What caused you to lose your balance?), preferring to ask the athletes what their victory "means" to them or how their loss makes them "feel." 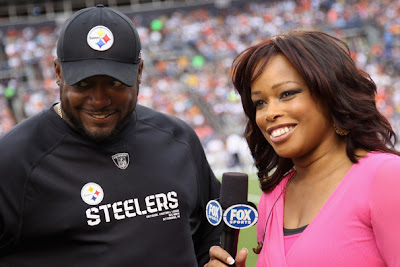 But this morning, after watching another series of infuriating Andrea Kremer interviews at the Aquatic Center last night ("Which Michael Phelps is going to show up tomorrow night? Come on, which one?"), I'm wondering if I'm in the wrong.

It is the human impulse to put up a front, to show the world the "us" we wish we were rather than let anyone see the "us" we really are. Isn't it the job of the reporter (if, sigh, we can even call them that) to try to bring down that facade? Isn't Jordyn Wieber MUCH more likely to tell us that she really hates Aly Raisman (if she does, which it appears she doesn't) for taking her spot in the gymnastics all-around final immediately following the performance than she is after she's gotten herself together? Wouldn't you be more vulnerable to real life if I woke you up at 3 o'clock in the morning and asked you what your true hopes and dreams were (or if you'd just gotten out of the pool at the Olympic 400 meter IM final and you couldn't really breathe yet)?

I think we can probably all agree that sideline reporting could be handled with more dignity, aplomb, and precision. It seems, though, that if we desire to be intellectually honest (which I do, when it suits me), we ought to be in favor of these excruciating interviews, as uncomfortable as they make us feel. The potential for real, ugly truth is often unsettling...because, you know,we just might get it.