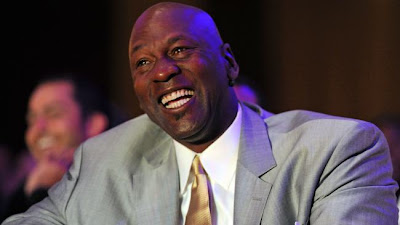 One of the lessons assigned in my church this past Sunday was a selection from Ephesians 4 and 5, wherein the writer implores the Ephesians to live a holy life, ultimately calling them to "be imitators of God" (Eph 5:1).  This is, no doubt, a heavy burden, laid crushingly bare by Jesus in the Sermon on the Mount: "Therefore you must be perfect, as your Father in heaven is perfect" (Matthew 5:48). This is The Law, in its most capitalized form. It brings about the death of the one who tries to live up to it.

A similar thing is happening to Jeffrey and Marcus Jordan.

In his "The Fix" column for ESPN the Magazine, Chris Jones notes the pressure that Michael Jordan's sons live under:


Most of us probably last gave thought to Michael Jordan's kids during his sometimes vicious Hall of Fame induction speech back in 2009. Interrupting his blistering of former coaches, employers and teammates, Jordan turned to his three children (he also shares a daughter with his ex-wife, Juanita) and said: "You guys have a heavy burden. I wouldn't want to be you guys if I had to."

In his tactless way, Jordan couldn't have been more right about that burden, borne especially by his sons. We might have forgotten about them -- Jeffrey's now out of basketball, and Marcus is likely about to play his last meaningful season, even if he puts Omaha behind him -- but they have never been able to forget what they always will be. Our sons should be better than we are; as fathers, that should be all of our dreams -- that they will be taller, richer, healthier, happier. Jeffrey and Marcus Jordan have no chance of eclipsing their dad. It's their destiny to remain his satellites.

This "no chance" that Jones refers to for the Jordan heirs is the same "no chance" that we have at being passable "imitators of God." So, what recourse do Jeffrey and Marcus Jordan have? They've taken a shot at individuality (sort of) with Heir-Jordan.com, but that site, intended as a way to "leave their own legacy," at this point "contains nothing more than dead links." This sort of father/son pressure is certainly nothing new, and not really anything profound. What is at least a little bit profound is Jones' solution to the problem: Fathers need to leave their sons. He opens his column with these words:


There are no faultless fathers. Some are better than others, but it's just not a job that allows any of us to be perfect. It's too hard, too ever-changing. It requires too many different skills, from tenderness to absolute resolve. And even if there were such a thing as a perfect father, our children would still slip out of our careful reach, because that's the natural order of things: One day we won't be their fathers anymore. Even if by some miracle our lives go exactly as planned, one day we will leave them.

He closes with these:


It's not all bad for the junior Jordans, of course. Our children will probably never have their millions or their high-end legal representation. But at least we can give our kids all of us. And no matter what mistakes we've made, we still have the chance to give our own children, our own sons, something that even Michael Jordan could not give his: One day we won't be their fathers anymore. We will leave them.

God the Father must leave his children in order for them to be saved. In other words, allow God the Son's atonement (tenderness) to satisfy his justice (absolute resolve). As Jones says, this isn't an option for the Jordan children. It is something, though, thank God, that has already been afforded us.
Posted by Nick Lannon at 8:30 AM