I Can't Believe That Was Good: Real Steel 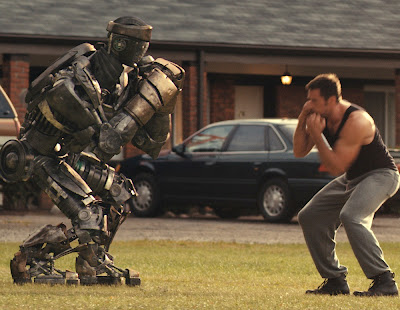 A new feature, "I Can't Believe That Was Good," will look at art (film, music, books) that is far better than expected.

Real Steel is an inspiring sports movie about boxing robots. Have you clicked away to some other website yet? Derisively called "Rock 'em Sock 'em Robots: The Motion Picture" when it was announced, the Hugh Jackman-starring Steel is the story of a man, his son, and his, er...robot. A formulaic film if there ever was one, Jackman is Real Steel's centerpiece, a washed-up boxer who takes to barnstorming with mechanized fighters when they replace the flesh-and-blood version in the ring. There's the ubiquitous mounting debts, estranged son (played very well, actually, by Dakota Goyo) and the tenuous love interest (Evangeline Lilly). Oh yeah, and the robot.

Real Steel is sort of Rudy, if told from the perspective of Rudy's strength and conditioning coach. Despite the ridiculous premise, stock characters (the evil robot is owned by an Ivan Drago-inspired femme fatale and programmed by a smirking smarter-than-thou Rising Sun board member) and the easily predictable scruffy-underdog-goes-up-against-slick-Goliath story beats, it's easy to find oneself cheering and grinning (at least on the inside) as the heroic 'bot (led by his heroic handlers) amazes crowds in a Gladitorial "are you not entertained?" fashion. Oh yes, we are entertained.
Posted by Nick Lannon at 8:30 AM