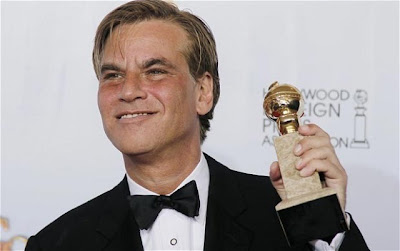 In the aftermath of his mostly disastrously-reviewed new show The Newsroom, I thought a Rundown of Aaron Sorkin's work was a good place to go.  You know, bring a little levity to the conversation.

A Few Good Men (1992)
Wow.  What a start.  "Deep down, in places you don't talk about at parties, you want me on that wall...you need me on that wall."  Tom Cruise and Jack Nicholson's stand-off, and the parade of future Hollywood celebs on the witness stand (Noah Wylie, Christopher Guest, Cuba Gooding, Jr.) make this one a must-see.  Demi Moore, Kevins Pollack and Bacon, and Keifer Sutherland round out an outstanding cast, and Rob Reiner submits his tightest directorial effort.  If you haven't seen this yet...I almost don't know what to say.  Watch it tonight.

The American President (1995)
Again working with Rob Reiner, Sorkin lets his politics out of the bag a little further with this one.  Michael Douglas' liberal Chief Executive (who's a widower) falls in love with a lobbyist (Annette Bening) and an evil Republican Senator (played with mustache-twirling irony by Richard Dreyfuss) tries to oust him because of it. Martin Sheen plays the President's top advisor and gets the chance to practice all the walking and talking he'll have to do when he graduates to the big job on The West Wing.  The best thing about The American President is Michael J. Fox as a strategist...because Michael J. Fox is always great.

Sports Night (1998-2000)
A dramedy about the inner workings of a SportsCenter-like television show, Sports Night lasted only 45 episodes, but is now revered as one of the greatest television shows that didn't really "make it."  Where Sports Night fell apart, though, was its acting.  Starring Josh Charles, Peter Krause, and Felicity Huffman (who is best known as part of Hollywood power couple Filliam H. Muffman), there wasn't a powerhouse in the bunch.  Sorkin is at his best writing for real actors who really know how to deliver dialogue.  Sports Night failed where our next entry didn't.  I dare you to watch this without cringing.

The West Wing (1999-2006)
Again, it's all about the actors.  For this one, Sorkin hired Martin Sheen (who, to me, is the worst of the bunch on this otherwise well-cast show), Allison Janney, John Spencer, and Bradley Whitford to carry the load, buoyed by a host of supporting players.  In West Wing vs. Sports Night math, Allison Janney > Felicity Huffman, John Spencer > Peter Krause, and Bradley Whitford > Josh Charles.  Therefore, The West Wing >>> Sports Night.  The second in his "Behind the Scenes of ______" quadrilogy, The West Wing was his jackpot, and made him an unassailable name in the annals of Hollywood screenwriting.

Studio 60 on the Sunset Strip (2006-2007)
Lasting only 22 episodes, Studio 60 was Sorkin's expenditure of all his built-up goodwill and entertainment capital.  A ponderous, preachy, un-funny look behind the scenes of a sketch comedy show, Sorkin's mistake this time wasn't the cast.  Matthew Perry should have been plenty capable of carrying the show, and many Sorkin regulars made appearances.  The problem here is Sorkin's own bravado.  He wrote the comedy bits himself...and they were terrible.  He portrayed hungry stand-ups and comedy writers as slick celebrities, signing autographs after the show.  Sorkin's writing was still enjoyably Sorkin, and I liked much of Studio 60 more than the trifling 30 Rock, but the terminally bland comedy on what was supposed to be a funny show proved to be too much for critics and audiences to overcome.

Charlie Wilson's War (2007)
An overlooked gem, Charlie Wilson's War should be sought out for Philip Seymour Hoffman's performance, if nothing else.  Starring Hoffman, alongside Tom Hanks and Julia Roberts, the movie, ably directed by Mike Nichols, more than makes up for in panache what it lacks in discernable story arc.  The arc starts nicely enough, but is brought to swift conclusion with a short scene and a coda card.  A pleasantly brisk 102 minutes, Charlie Wilson's War is the unsung hero in Aaron Sorkin's filmography, if only because it seems to be the only entry that isn't sung!

The Social Network (2010)
"How do you make a movie about Facebook?" was the prevailing line of thought in 2009 when The Social Network was filming.  No one was wondering that walking out of the theater, though...the answer was obvious: hire Aaron Sorkin.  Working again with an accomplished director (this time, David Fincher), Sorkin tells the tale of Mark Zuckerberg's travails surrounding the birth of the most popular (un-researched and non-porn) website of all time.  Also, Fincher cut together one of the greatest previews ever.
Moneyball (2011)
And there it was again..."How do you turn Moneyball into a movie?"  There's no real story in Michael Lewis' literary masterpiece about Oakland A's General Manager Billy Beane's (Brad Pitt) efforts to field a competitive team with one of Major League Baseball's lowest payrolls.  Sorkin turns all of that into a sort-of Bad New Bears-style tale of ragamuffins who...well, they don't win the big game, but they did win 20 games in a row.  Jonah Hill plays Peter Brandt, a composite of several real people who taught Beane about sabermetrics, the kind of advanced statistical analysis that allowed Beane to find real value in affordable players.  And so again, "Hire Aaron Sorkin" was the correct answer to "How do you make a movie out of that?"  Perhaps Peter Berg should have hired him to write the script for Battleship.
The Newsroom (2012)
Well, we'll see.  With all of the above said, it should be good, right? The show's on HBO, so beware...there's one schword in the trailer:
Posted by Nick Lannon at 11:25 AM

Email ThisBlogThis!Share to TwitterShare to FacebookShare to Pinterest
Labels: movies, the rundown, tv