The Long Arm of LeBron's Law 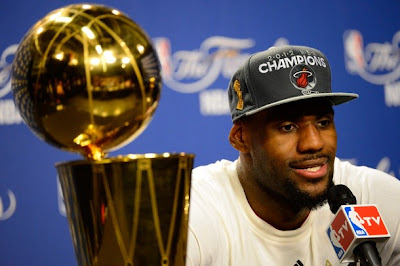 I've never been more happy to be wrong. In both my NBA Playoffs preview column and my Finals preview, I picked the Heat (and therefore LeBron James) to lose in the NBA finals. They (and he) didn't. LeBron played so excellently that many of his critics have had to reconsider their criticisms. And it's that reconsideration that has been so interesting.
The most common talking point of the post-championship coverage (other than the celebration of LeBron's performance) is a question: Who will the pressure to win, that pressure that was once LeBron's, pass to? In other words, who will the sports world now begin to judge for their failure to win a championship? For several years, it was Phil Mickelson who "couldn't win" a major. He consistently fell short in big tournaments, seemingly wilting under pressure...until he won. Then it was LeBron...until he won. The question that sports pundits have been asking each other all week is...so who's next? Here's an example.
A wittier man than I once said that we are born lawyers, and that we have to learn about grace. The urge to judge, the urge to find fault, is powerful, and seemingly inbred. It is sourced in self-justification; that is, the desire to find at least one person who is worse that you, so that if someone's going down, it's them, and not you. This is true from elementary school playgrounds to high-powered boardrooms.

The urge to transfer the "Why haven't you won yet?" pressure to another athlete puts the lie to the claim that LeBron put the pressure on himself with "The Decision" and with the Heat's welcome party, etc. Certainly those things intensified the pressure, but the fact that everyone agrees that the pressure must go somewhere proves that it exists outside of Mickelson, James, and "not five, not six, not seven..." We require someone to put the pressure on because we cannot bear the thought that it might end up on us. 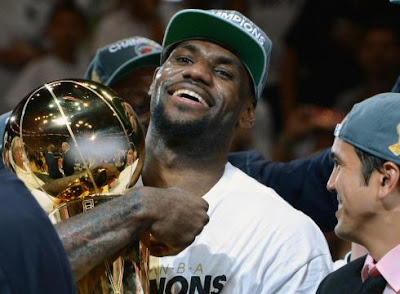 This is the most generic of all laws, and therefore perhaps the most powerful. Even when we reject directives like "Honor your father and mother" or "Love your neighbor as yourself" we find ourselves beholden to the law of "be good." But what's good enough?
Our number one job as self-interested human beings is self-justification. It was a great comfort to be able to say, when confronted with a personal failure, "Well, at least I never jilted a city, joined another superstar, and then failed time and again in clutch moments!  At least I'm not a championship level loser!" Now that LeBron is no longer such a loser, we are thrashing around, flailing, for some other poor (read: wonderfully talented) athlete on whom to pin our outrageous expectations, all in the hope that they'll fail, so that we can look better by comparison.  If we worry about living up to the law of "be good," we can least be better than someone.

Tellingly, the thing that LeBron credits with enabling his success this year is his "owning" of his failures from years past. It is when we can stop our search for someone to whom we're superior that we can have the freedom to be ourselves...and possibly succeed.
Posted by Nick Lannon at 8:00 AM