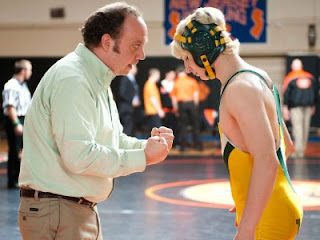 Known more for his work in front of the camera than behind it, Tom McCarthy nonetheless bring assurance and wit to his new indie comedy Win Win.  But let's stop right there.  The phrase "indie comedy" can raise ire in people, and I want to be clear: this is the cream.  Immune to the excruciating preciousness of films like Juno, (500) Days of Summer, or Nick and Norah's Infinite Playlist, Win Win retains its grip on reality.  There are no wise-beyond-their-years little sisters, hamburger phones, or people with cute, idiosyncratic hobbies that would, if they existed in the real world, send their practitioners to padded rooms.  There's not even a soundtrack of album music by some up-and-coming alt-rock band.  Lyle Workman's score is definitely at home in the indie-comedy world, but not overwhelmingly so. 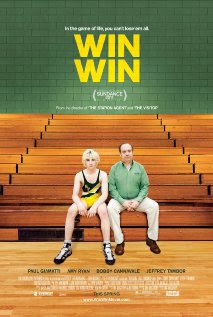 Paul Giamatti stars as a slightly-down-on-his-luck lawyer and high school wrestling coach who takes on guardianship of an old man and all the complications that ensue.  It's a credit to Giamatti that he can remain the protagonist even as McCarthy (who wrote the screenplay from a story for which he shares credit with Joe Tiboni) saddles him with a moral failing so profound that a less likable (and capable) actor would have died under its weight.  In addition to Giamatti's wonderful (as usual) work, Amy Ryan and newcomer Alex Shaffer are wonderful as his wife and top wrestler, respectively.  Shaffer, most notably, plays the anti-Juno MacGuff...that is, a totally believable teenager.

The plot turns on the oldest trope of all time: One of a couple tells a lie, and then the lie is discovered and the relationship is ruined...right up until everything is nicely healed in time for the closing credits.  I've always been wrankled by this convention, as the person who's been lied to inevitably acts like a fifteen-year-old, unable to hear the apology for, or the rationale behind, or anything about the original lie.  The innovation here is that the character who's been lied to IS a fifteen-year-old, and it makes the reaction seem wholly appropriate, and the reconciliation earned.

Bobby Cananavale and Jeffrey Tambor give solid supporting performances in a feel-good movie about real people, with real problems, that actually makes you feel good without feeling manipulated.