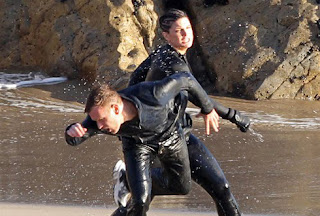 Despite its title, Steven Soderbergh's most recent film Haywire is anything but.  Newcomer (and MMA fighter) Gina Carano plays Mallory, a private contractor (we don't really get the details of what she does) who gets sold out by one of her bosses.  She sets out to find out who, and exact her revenge.  The candidates are Ewan McGregor, Antonio Banderas, and Michael Douglas.  Channing Tatum and Michael Fassbender play other contractors who either help her or try to hurt her, depending on the situation.

I really wanted to like this movie.  I was excited about it, having loved The Limey, the previous collaboration between Soderbergh and screenwriter Lem Dobbs.  Soderbergh does make some interesting choices, not least of which is casting Carano to play opposite a bevy of talented actors rather than no-namers who might not throw her lack of acting ability into sharp relief.  Carano admirably holds her own, however.  Dobbs does a good job of giving her dialog that she can manage, and Soderbergh helps by giving her hero shot after hero shot, making verbal banter unnecessary.  In addition, he makes the right choice of having no score over the fight scenes, drawing our attention to each blow and the havoc it wreaks. 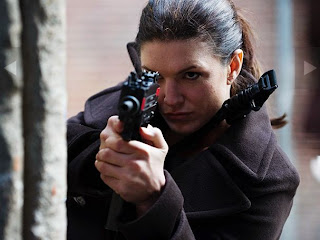 There is something lacking here, though, and I think that this is...well, there's nothing going haywire!  Even as Carano's life falls apart around her, reducing the number of people she can trust to zero, that feeling is never really transferred to the audience.  In an early scene, Carano chases a bad guy through the streets of Barcelona, but despite the fact that they're both moving quickly, the scene lacks energy.  It won't be a popular opinion, but I think Haywire could have used an edit by the Tony Scott school of quick cuts, blurry motion, and frenetic pace.  This goes against everything that Soderbergh believes in (and everything that he's done so well in past, e.g Traffic, Erin Brockovich, The Informant!, and yes, The Limey) but feels necessary here.

It's not a film about Carano working through clues...when her chief antagonist escapes to Mexico near the end of the film, she finds him in the next sequence, with no explanation for the viewer.  It's not a thriller: Carano's victory is never in doubt, and her adversaries are obvious from the beginning.  In a sense, it's no different than any film vehicle for an MMA fighter or professional wrestler (think The Condemned or 12 Rounds).  Put adversaries in his or her path; let the butt-kicking commence.  Soderbergh, Dobbs, and the rest of the cast lend an air of respectability, and Carano is beautiful and a physical powerhouse.  It's a pretty picture, but like Soderbergh's other notable style-over-substance effort The Good German, there doesn't seem to be much point to the exercise.