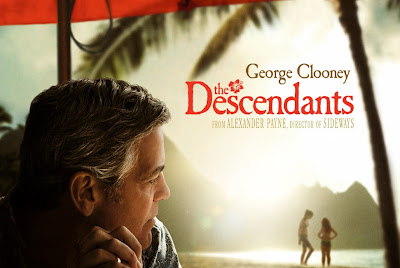 It's been a while since Alexander Payne made a movie.  He's one of my favorite directors, and I've loved all his films.  Sideways (2004) was probably his most successful work, and in the 7 years since it came out, I've been anxiously awaiting his next offering.

I loved The Descendants.  It's not an overwhelming film, in the sense that you don't walk out of the theater thinking, "WOW!  What a movie!"  In fact, as I left the theater, I wouldn't have put it among Payne's best work. Let the story percolate for a few days, though, and it only gets sweeter.

George Clooney plays a descendant (get it?) of King Kamehameha and, as such, a trustee of vast expanses of Hawaiian paradise.  Life is not all cocktails and beach blankets, though, as he deals with a dying wife, daughters he can't control, and disturbing revelations about the past.  The performances are measured and believable.  Shailene Woodley, especially, is excellent as Clooney's eldest.  The best thing about The Descendants, though, is the writing.  And I don't mean the dialogue; Payne, Nat Faxon, and Jim Rash (Dean Pelton on Community, of all things) adapt a Kaui Hart Hemmings novel, and between the four of them, they just nail it.

The film has twin themes, and both resonate deeply:  first, that things are often NOT going to be okay, despite our protestations, and second, that it is precisely in these situations that we find ourselves drawn closest to those we love.  Clooney's Matt King suffers in the same way that the less fortunate do.  Despite his friends' and family's continued assertions that "everything will be okay," and that his wife is "strong" and that "she'll beat this," Clooney knows better.  Payne continually cuts to the wife, in bed, immobile and dying, not shying away from close-ups, driving home the point that this thing is not okay.

Clooney admits pointedly throughout the film that he "doesn't know what to do" with his daughters, but finds the travails of normal life bringing his family together, in ways that he never expected.  What you can expect?  Another heartfelt and beautiful Alexander Payne film, right in line with his best work.