Tim Tebow, We're Not Through With You Yet

Everyone is seemingly tired of talking about Tim Tebow. And yet, they talk. And talk and talk. I witnessed Kordell Stewart get visibly angry this morning on ESPN's First Take when talking about the chances that Tebow is getting compared to chances that African American quarterbacks with the same skill set have gotten in years past. At one point, he simply sighed and said, "I'm just so tired of talking about Tim Tebow." But even after Tebow's Broncos are eliminated from the playoffs (hopefully this week by my beloved Steelers), we'll talk about whether or not Tebow is the "quarterback of the future" for the them or if he has a future on any NFL roster.
Even Saturday Night Live is talking about Tebow. Admittedly, the above clip is several weeks old, and the Broncos have lost their last three games. Apparently, Jesus stayed away longer than he thought he would. But this post isn't about Tim Tebow. Surprised? Well, it is and it isn't. It is in the sense that Tebow's play (terrible for three quarters, dominant in the fourth) illustrates a common misconception about God: that he's involved in the good stuff and absent for the bad stuff. The Gospels, on the other hand, overflow with stories of Jesus becoming involved with sin, illness, and death. He said explicitly that he didn't come for the healthy, but for the sick (Mark 2:17). My friend John Zahl has famously said that "God's office is at the end of your rope."
Another thing that Saturday Night Live gets wrong (who knew they were such a flawed theological source?) is the idea that what God really wants is for us to do most of the work ourselves, or at least, to "meet [him] halfway." This has been said another way: God helps those who help themselves. Only...that's not true. Remember, Jesus said that the healthy have no need of a doctor. If someone is well enough to work, they'll convince themselves that they don't need saving after all. If we might be so bold, Tim Tebow highlights the Broncos need for a savior by helping put them in a seemingly untenable position each week. Indeed, God's power is made perfect in weakness (2 Cor. 12:9). 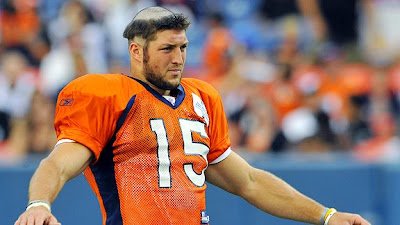 As funny as Jason Sudeikis' Jesus is, he's unlike the Christ in two profound ways: he wishes humanity would do more to help itself and his absence means that things will probably go awry. Luckily, our Jesus helps the helpless and makes his home in our weakest moments.
Posted by Nick Lannon at 3:42 PM