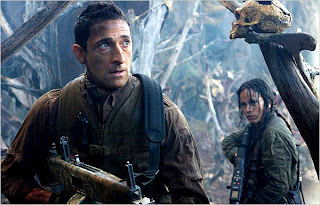 In his 2010 film Predators, Nimrod Antal makes a couple of good choices right off the bat.  First he decides to completely eschew the mythology that sprang up following the release of the 1987 classic Predator.  A second film, Predator 2 (1990), a couple of Alien vs. Predator movies (2004 and 2007), and several series of comics greatly expanded the franchise, but left some fans of the original wishing for a return to simpler times.  Predators is advertised as a "direct" sequel to Predator.

Antal's second smart move is to hire good (or at least known) actors.  Brody, Braga, and Grace and joined by Laurence Fishburne, Danny Trejo, Walton Goggins, and Oleg Taktarov, who will all be recognized from many other films.  These are not your standard cardboard-cut-outs-picked-off-one-at-a-time people.  We can expect more from them.

Third, the movie has a pretty killer hook:  the first shot of the film is Brody waking up in free fall, plummeting to what he can only assume is earth.  We find out, though, that he is one of eight ruthless killers (including black-ops military, yakuza, a death row inmate, an RUF fighter from Sierra Leone, etc) brought to a planet-sized game preserve to be hunted by Predators for sport.  Get it?  The Predators have gathered Earth's predators.  Potentially cool, right? 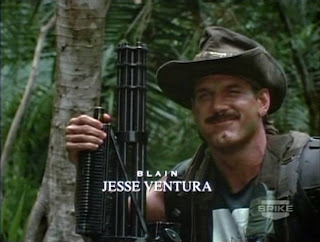 But then...that's it.  These actors who are capable of giving characters some depth and shading don't.  They become the thing that should have been avoiding most of all: cardboard cut-outs, picked off one by one.  Predators becomes a generic monster movie.  The "good" actors in Predators fail to do what the lesser actors in Predator did so well: be fun.  Predator's cast includes Arnold Schwarzenegger, Carl Weathers, Jesse Ventura, Bill Duke, Sonny Landham, and Shane Black.  No standout thespians in that list, but a lot of scenery-chewing fun.  Note the different expressions on Brody's and Ventura's faces.