Frasier Crane and the Illusion of Self-Control 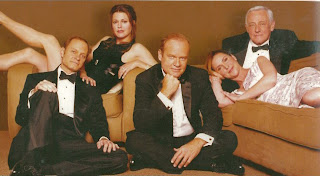 In the final season episode "Murder Most Maris," Niles' (David Hyde Pierce) ex-wife is accused of murder. Niles is implicated as a possible accessory, for lending her an antique crossbow, which became the murder weapon. His life swirling out of control, Niles "chooses" to be calm. Martin (John Mahoney), the Crane boys' father, observes, "Wow! He's really holding up well!" "A little too well," Frasier (Kelsey Grammer) retorts. "I'm starting to fear that he's not dealing with his emotions at all!" Martin says, "Right. That's the whole secret to holding up."

This exchange illustrates a disconnect that people, and Christians, experience. What is the difference between what is on our outsides and what is on our insides? What is real? Which is more powerful? As Martin suggests, we often think of obscuring what's really going on as a skill. The grieving mother who gets right back to work, or the mourning father who never cries. This is called, in some circles, "strength." But is this kind of strength worth anything?
As "Murder Most Maris" continues, Niles' life becomes more and more unbearable, and he becomes more and more robotic in his insistence that everything is fine. Finally, he goes to Cafe Nervosa (the inevitable coffee shop where everyone is always hanging out) with Roz (Peri Gilpin) and asks for a straw, only to be told that Roz just got the last one. Here's what happens:

So you see the point: whatever's underneath will eventually come out. The core will come to the surface. The reason we find The Stepford Wives so creepy is that buried emotions are unnatural. This is the illusion of self-control. We tell ourselves that people like Niles are exhibiting great self-control. Martin certainly thinks so. But he's not actually controlling his discomfort and stress, he's simply hiding it. We find that he's only acting calm, cool, and collected. And no one can hide their true selves forever. We put a smile on our faces and say, "I'm happy." But isn't it well-known that clown make-up hides despondence?
Christians often feel it necessary to hide their insides (their sinfulness) from each other, fearing that they'll be revealed to be lagging behind on the great path to righteousness. However, and of course, God looks on the heart. And as we say all the time, it's a good thing that Jesus came for sinners, and not for the righteous! It's a good thing that he came for those of us who can't handle our lives, rather than for those of us who can. The Gospel is good news when we find ourselves exposed, as Niles does, by situations beyond our illusions of control.
Posted by Nick Lannon at 11:02 AM