Frasier Crane and The Sermon on the Mount 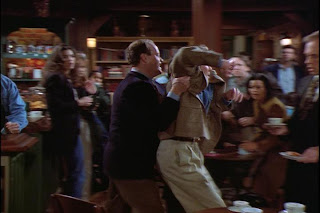 Frasier has had a rough day. Someone parked in his spot at the office, making him late for work. Someone talked through the movie he tried to enjoy at a theater. Someone then rented the videotape out from under him. The clerk helps the person on the other end of the phone rather than helping Frasier, who has taken the trouble to come down to the store. His upstairs neighbor plays his rock music (which consists entirely of the lyrics, "Flesh is burning, na na na na na na."). Finally, when a man steals his waited-for seat at the local coffee shop, Frasier has had enough. Grabbing the man by the collar, he runs him out of the shop, shouting, "What you need is an etiquette lesson!"

This third-season episode is called "High Crane Drifter" in homage to the little-known Clint Eastwood film High Plains Drifter, in which a drifter (who may or may not be a ghost) blows into town and cleans it up by brute force. Frasier chastises himself for allowing his more animal nature to come out. He prefers, he says, to settle his disagreements like an adult, with words and reason. But the newspaper hails him as a sort of folk hero. And, to his dismay, people begin to follow his example. 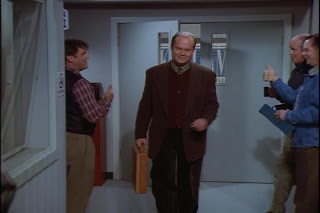 Daphne, tired of someone taking her wet laundry out of the washing machine, decides to use a red article of clothing to take revenge on a load of whites, leading to a great line: "Those were my panties and I wasn't afraid to use them." People all over town start taking Frasier's example to heart and begin giving little "etiquette lessons" of their own. A caller whose neighbor used a leaf-blower at 7am, brags about smashing the leaf-blower into a tree. Another shoves a pound of rotten shrimp into a rival's air conditioner.
After dozens of callers describing their vigilante exploits, Frasier exclaims that they've gone too far! "I displayed a minor bit of force to just make a point...I didn't go around smashing windows or torching lawns! Where does it end?" His caller replies, "Are you saying that what I did was wrong?" "Of course I am!" shouts Frasier. And the caller responds, "But what you did was okay?" This stops Frasier in his tracks. And then, and this is one of the reasons I really love this show, Frasier realizes what the right thing to do is, and does it: "Come to think of it, what I did was just as wrong. I mean, who am I to draw the line at the acceptable level of force?" 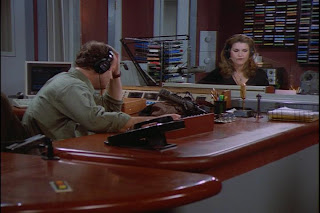 This is a theologically profound statement. "Who am I to draw the line?" Well, you're no one. It's not our line to draw. We WANT it to be, which is why Frasier starts on his rant, and why we find The Sermon on the Mount so distasteful. Being angry is the same as murder? Lust is the same as adultery? This is ridiculous! And yet, as Frasier admits, if we are the ones left to draw the lines of acceptability, won't the next person just push it a little further than we did? Where does it end? If murder and adultery are seemingly more gross violations, surely anger and lust are the core of their inception. Frasier realizes in that moment what God has provided for all along: Righteousness must be complete to be worth anything at all. It is only God who can draw the line, and it is only God who can toe it.
Posted by Nick Lannon at 1:22 PM