Halloween was last week. I've never been that excited about Halloween myself, owing probably to the incident in my youth, when, having to go to the bathroom while trick-or-treating far from my home, I was shocked to be refused entrance to house after house. "May I please use your bathroom?" I'd beg in my best "I'm a cute suburban white kid with good grammar and it's barely dark out here -- what could go wrong?" voice. I eventually had to run home in mortal fear of peeing my pants -- the scariest Halloween ever.

What has interested me about Halloween is its intersection with culture, and especially Christianity. Growing up in the church, I've seen churches attempt to do all kinds of things with Halloween, from ignoring it completely to throwing elaborate competing "Harvest Festivals." My
favorite Christian/Halloween story comes out of Eden Christian Academy of Pittsburgh, PA (slogan: Pretending People are Perfect since 1983). A dear friend worked as a teacher there, and experienced this first-hand. Presented with the problem of what to do about Halloween one year, the faculty went back and forth: Use it as a teaching moment to communicate about the occult? Embrace what has become a harmless evening of candy-getting rather than a celebration of pagan ritual? Of course not. So afraid were they of dealing with the Halloween "problem," they did the least productive thing they could have: They cancelled school.

Why is it that Christians are so afraid of Halloween? Well, it all comes from Eden's slogan, which I conveniently made up to suit my purposes. In real life, Eden doesn't seem to have a pithy slogan, but has an 8 point statement of faith. The "problem" with Halloween, though, is a seeming fear that a "bad" thing will corrupt "good" kids. I don't know about you, but I was a kid, and Halloween was the least questionable thing we were up to. It's not just Christians, either. Check out this list of rules for costumes at a Halloween parade at Riverside Drive School
in Los Angeles: 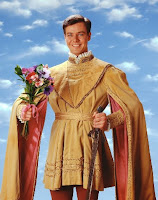 Some of this is pretty standard P.C. stuff, but what costumes are left? In a school district in Illinois, students are being encouraged to dress up as historical characters or delicious food items rather than vampires or zombies. I am not making this up! A lot of this information can be found in a funny AV Club article. The writer of the article ends with this warning to parents: "Most kids can tell the difference between reality and dress-up -- and if they can't Halloween is the perfect time to learn. Your children have all their lives to become lame fraidy-cats. Why make them start now?"
When it comes to Christians and Halloween, if we can admit that we are not perfect beings trying by any means to avoid corruption, maybe we can dress up like Freddy Kruegger and get some fun-sized Kit Kats. If we believe, as Eden Christian Academy claims to, that our righteousness is sourced in Jesus Christ and not in ourselves, we don't have to worry so much about the possible corruption that bobbing for apples and trick or treating might cause...We can do the zombie dance and just have fun!
Posted by Nick Lannon at 9:42 AM