The Id of Andre Agassi 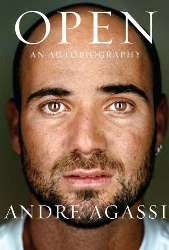 "Why?" the sports pundits wail. "Why have you done this to us!" Andre Agassi's recent admissions, in his book Open, that he took crystal meth for a year during his professional tennis career, lost matches on purpose, hated tennis, wore a wig during major tournaments, and, perhaps most importantly, didn't wear underwear for the last ten years of his career, have rocked the sports world. Many pro tennis players, such as Martina Navratilova, Roger Federer, Rafael Nadal, and Marat Safin (most recently) have been critical of Agassi, mostly for the drugs and tanking. It is, however, the outcry from sportswriters and talkers that interests me most.

Mostly, they seem saddened by the fact that Agassi has sullied his amazing reinvention of himself. Early Agassi was a classic me-first athlete who dared to challenge the all-white dress code at Wimbledon. Then, Agassi bottomed out (due, we know now, to a crystal meth addiction) and his world ranking fell off the table. In a true humanist dream, though, Agassi came back. Hair shaved (or wig removed) and focus restored, he climbed back to the top of the tennis world, and retired as one of the most popular athletes in the world. If this sounds like an exaggeration, you're underestimating tennis' international popularity. 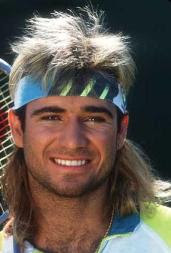 Agassi was a poster boy for our pull-yourself-up-by-your-bootstraps ideal. And then, post-retirement, his philanthropic work is unparalleled. And now, people are seeing all of this as undermined by the admissions in Open. "Wait," pundits seem to be asking, "Could Andre Agassi be...a bad person?" They are angered for having loved someone who may not have deserved it.

The biggest question coming up on the sports talk shows, and I saw it again on Mike and Mike (on ESPN 2) this morning, seems to be: Why jeopardize your standing and perception by admitting to stuff that you've, to date, gotten away with? Why not just keep it bottled up? If you had to let it out, why not hire a shrink? Why spill it on us? Sigmund Freud, as you might imagine, is pounding on the inside of his coffin, reminding us of what he said about the human psyche.

It is Agassi's id, the animal center, that caused him to act out during his life. It is his super-ego that has judged him harshly for it. When Rick Reilly interviewed Agassi, and talked about losing matches on purpose, he asked Andre, "how do you justify that?" Reilly played into the human expectation: we self-justify. That's the job we give ourselves. Our super-ego judges us, and we self-justify. Agassi, in a moment of true self-actualization, said, "I don't." Agassi found that he had to admit his true nature to the world, so that people would know who he really is. He knows that his huge amount of philanthropic work, wonderful as it is, is simply covering up the true Andre Agassi. If he's to be loved, he knows that he needs to be loved for who he really is, not just for who he appeared to be. The truth of his life was holding him hostage...for years. The truth of his life, let out, has set him free (John 8:32).