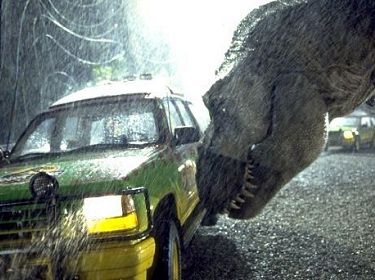 1) Is Michael Crichton the most underrated author EVER?
2) Why is it impossible to make a good movie from a Crichton novel?
Crichton is often lumped with John Grisham into the "They are super popular and rich s
o their writing must be terrible" caste. While this definitely applies to the atrocious James Patterson, Crichton, and to a lesser extent, Grisham, is able to tell a great yarn while keeping his craft honed. In a sense, this post is a tribute to Crichton (my co-favorite author with John Sandford and John Irving), who died recently, of cancer. Crichton's books, which most will know from their film adaptations, include Jurassic Park, The Lost World, The Great Train Robbery, Rising Sun, Sphere, Eaters of the Dead (filmed as The 13th Warrior), Congo, Disclosure, and Timeline. There are more, but these are just the novels turned into blockbuster films. This guy is the Elvis of popular fiction! But a more pressing question arises: How is it possible to turn such great stories into such terrible films? (Note: The Terminal Man and The Andromeda Strain were made into movies so long ago that they don't count. Maybe the could be REmade!) His stories have been tackled by directors as talented as Steven Spielberg and Barry Levinson with no luck. Crichton even tried once himself, directing the almost-passable Great Train Robbery. Is it the sci-fi/thriller combination? Maybe. But movies like Minority Report (Spielberg) succeed where Jurassic Park fails. Now, I should note that Jurassic Park made approximately 47 bazillion dollars, making it successful by any objective measure. Luckily, I'm a blogger now, and am free from the weight of appeasing subjective measurements.

I think the problem with Crichton adaptations is that they are NEVER cast well. EVER. Sam Neill and Laura Dern are passable actors, and have done good work elsewhere...but action stars? Come on! Crichton adaptations star the likes of Dustin Hoffman (most overrated actor in history...but that's another post), Sharon Stone, Antonio Banderas, Ernie Hudson, Dylan Walsh, Laura Linney (ok, she's good...usually), Michael Douglas, Demi Moore, Sean Connery, and in the thrilling conclusion, WESLEY SNIPES and PAUL WALKER! It's like they're not even trying! It's a veritable rogue's gallery of either no-talent box office bankables (Snipes, Walker, Stone, Banderas) or horribly miscast talent (Linney, Dern, and Neill).
What do you think? Am I crazy? Is Crichton the no-talent hack? I dare anyone to read Sphere or Airframe and not love them. What can we do to ensure that the remaining un-filmed Crichton novels (Airframe, A Case of Need, Next (in development), and the posthumous Pirate Latitudes (Spielberg is attached)) don't get the same treatment?
Posted by Nick Lannon at 3:19 PM