Pathetic AND Powerful? A "Murderball" Psychology 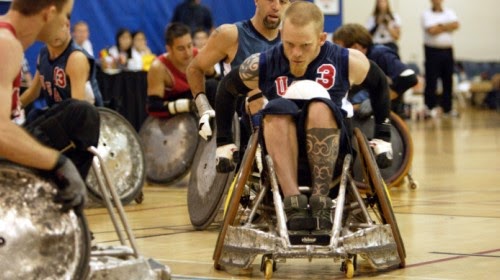 One of the greatest documentaries of the last several years (and the last several years have been great ones for documentaries) is Murderball, the story of the United States Quad-Rugby team, a Paralympic team of quadriplegics. "Quads," as they call themselves, refers to the fact that they have lost some use of all four limbs. Almost none of the rugby players have any use of their legs, but many have relatively little impairment in their arms. The level of impairment depends on where the neck or back was broken. "Murderball" is the nickname for wheelchair rugby, which teams play in modified chairs that look like something out of Mad Max. I won't tell too much of the story (because I want you to see this movie...I'll lend it to you!) but just one of the subplots is that the greatest player in the history of United States wheelchair rugby, who finally gets too old to make the team, feels rejected by the US and goes to Canada to coach the competition! There is so much juice in this movie to talk about, this post could well be dozens of paragraphs long. However:


The interesting for us, this time, is the interplay between physical disability and mental attitude. As you might imagine, the quadriplegics who play murderball are some of the most competitive, independent, and feisty spirits in the world. They would kill themselves before letting anyone take pity on them. One of the players, Mark Zupan (pictured at the top), says, "I'll go up to people and start talking (expletive). And they'll look at me like they don't know what to do. And I'll say, 'What, you don't want to hit a kid in a chair?' (Expletive) hit me! I'll hit you back!" You can see the unchecked bravado: He is starting altercations to call attention to his self-sufficiency and strength.

Of course, it's overcompensation. Feelings of weakness (the film begins with a painfully long scene of Zupan simply changing his clothes) lead to professions of strength. These professions, though, are offset starkly by another moment in the film. Scott Hogsett, one of Zupan's teammates, is talking about picking up girls: "The more pathetic I seem, the easier it is to get them!" Beyond the obvious disingenuity of Hogsett's strategy, it's interesting to note that he is claiming, in effect, to be pretending to be pathetic. The technical definition of "pathetic" is "evoking a feeling of compassion," which these men most certainly do. By any standard grammatical definition, they are pathetic. Of course, the word has come to mean something far more negative, and it is that connotation that these athletes reject.

It got me thinking, though...what are the times when we play up our patheticisms (as of now, consider this word real)? When does it serve us to allow our pains (our very real pains) to come to the surface? These quadriplegics are suffering; you can see it on their faces. They live their lives in denial of it, in much the same way that we deny much of our suffering. Confronted with something that they want, though, and they are happy (maybe...and only for a time) to play up their need. Are Christians like this, or are we the opposite? How do we handle our deep-seated sufferings? Do we, knowing that Christ came to and for sufferers, wear the thorns in our flesh as badges of honor? Or are we like Quad Rugby players, keeping our needs deep beneath our surface, in the hope that Jesus won't have to come for us at all? If it's true that sufferers will, in Christ, lack nothing (James 1), why do we work so hard to seem just fine?

In a profound sense, I am just like Mark Zupan and Scott Hogsett. I'm ready for a fight. Aren't you? To Christianize all of this stuff: We want to be able to stand before Jesus and say, “Lord, you know I’m not perfect! Look, I’ve suffered. My family is broken, my self esteem is low, I'm confined to a wheelchair. It was a long, tough road, and I’m a little woozy.” We might even quote Footprints in the Sand: “You even had to carry me sometimes. But the important thing is, I made it! Here I am.” I made it! Here I am! might as well be the Hymn of the Quad Rugby Player...or of the Human Being.


Unfortunately, the things we’re willing to admit to having lost aren’t the right things! They’re the superficial things, like success or happiness, or the apparently profound things, like legs or love. The thing that Jesus needs us to give up is the thing we hold on to most tightly: our hearts; our very lives. Jesus said, “If any want to become my followers, let them deny themselves and take up their cross and follow me. For those who want to save their life will lose it, and those who lose their life for my sake, and for the sake of the gospel, will save it” (Mark 8:34).

We’re willing to let Jesus carry us part of the way. We’re willing to be helped. What we can’t abide is DYING! For us, dying means failure. It means the end. We’re used to hearing that someone “lost the fight” against cancer. We think of dying as losing! This is why we pick fights from our wheelchairs. But Jesus says, “You need to give up on that old heart...that fighting spirit! It’s the source of sin! IT’S the thing that’s holding you back!" But there is good news. Paul writes in 2 Corinthians that “if anyone be in Christ, he is a new creature: old things are passed away; behold, all things are become new.” ALL THINGS ARE BECOME NEW! The old heart has been removed. Not rehabilitated...removed and replaced. Death, for us, is not the end, but the beginning, of life. And so we might sing the great chorus of the Third Day song Take My Life:

Please take from me my life
When I don't have the strength
To give it away to You, Jesus

We don't have the strength. We're confined to wheelchairs. But we're full of fight. It's this fight that the Law ultimately kills. Jesus takes the hearts we refuse to give him, and behold, all things are become new.