Happy Independence Day: You're Not Free 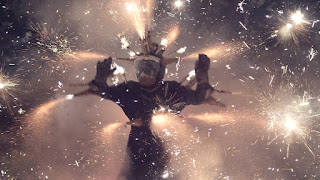 When, in the course of human events, it becomes necessary for one people to dissolve the political bonds which have connected them with one another…wait, that sounds familiar. Has someone said that before?

But that’s just what I’m going to do today. I’m going to take your freedom. Or, more accurately, I’m going to tell you that you never really had it in the first place. I’m going to suggest the unthinkable: that you’re not as free as you think you are. Since we all have a little Patrick Henry and William Wallace in us, you might find your hackles rising and the hair on the back of your neck standing up, your fight-or-flight response coming to attention. “Not free!” you’re wondering…“what is this clown talking about?” But stay with me: we’ll see together that, first of all, when we examine our lives, it’s actually pretty normal and obvious that we’re a lot less free than we thought, and finally, we’ll see that our relative lack of freedom is—counter-intuitively—actually wonderful Good News.

Let us begin with a movie illustration. There’s a thought-provoking but ultimately-not-all-that-good movie from 2011 called The Adjustment Bureau, which stars Matt Damon as a politician who falls in love with a girl he's not "supposed" to. There’s a shadowy organization—the Adjustment Bureau of the title—whose job it is to keep us normal human beings on the course that “the Director” has planned out for us. It’s a movie about fate, about predestination, and about freedom. Damon decides to go against the wishes of the director and his plan, and to try to exert his freedom and be with the girl, no matter what.

The larger plot of the movie brings up a lot of interesting things that we could talk about, but for now, I want to focus on just one particular scene. It’s a scene that, ironically, in this movie about freedom, is a beautiful illustration of our LACK of freedom. Watch:

Sound familiar at all? Sounds like every single day. But maybe you’re still skeptical. Perhaps you think that this kind of thing is unique to politicians. It isn’t. Every single one of us stands in front of our closet every morning—and choosing our outfit is probably the freest decision we imagine that we make—in bondage. We are bound, maybe only subconsciously, by the impression we want to make on the people we’re going to see that day. We want them to respect us, or to think we’re cool, to be impressed, to notice our bodies, to be aware that we can afford nice clothes…any of a hundred different things you might think about as you make your "free choice." It’s not that we’re robots who lack freedom, it’s that every decision we make is pressured by forces on every side. The email that you have to send that you read over and over again, choosing your words very carefully; the phone calls you make only after taking a deep breath and centering yourself…so much of your life is made up of responding to the myriad pressures in your life, doing things you feel like you have to do, or doing things in the WAY that you feel like you have to do them. This isn’t freedom. It’s bondage.

So we’re not free. Happy Independence Day! And again, it’s not that we don’t have a will, it’s just that our wills aren’t quite as free as we thought they were. Theologians have called our wills "bound." It's actually very simple and totally makes sense when you think about it. Imagine you and your will standing in the center, but all the various forces in your life have thrown a lasso over you and are pulling you in all sorts of different directions. Your in-laws. Your spouse. Your friends. Your employer. Your plans for the future. The girl or boy you hope will notice you. The mistakes you hope to avoid. You and your will, pulled this way and that. That’s all we’re talking about here. You’ve got enough of these ropes around you, yanking you back and forth, that it’s pretty hard to think of yourself as free. You’re bound. St. Paul, in Romans 6, goes a step further and calls us slaves. This is strong language, but he’s got an important point to make. “Thanks be to God,” he says, “that you, having once been slaves of sin, have become obedient from the heart to the form of teaching to which you were entrusted, and that you, having been set free from sin, have become slaves of righteousness” (v. 17-18).

Slaves. Ouch! But notice what he does: he only calls us slaves to give us Good News! “Thanks be to God!” he says. We’re not slaves to sin and the devil anymore, we’re slaves to righteousness and Jesus Christ. Before, we ran to and fro, trying to satisfy the various forces that had lassos around us, trying to justify ourselves in the eyes of…well, everyone. But this only led to a kind of death. You know the death he means…the lifeless, soul-crushing practice of trying to placate and satisfy everything and everyone in your life, only to feel, every single time, that you’re coming up short. That you haven't done enough. That you’re not good enough. “What advantage did you then get from trying to do that? From trying to save yourself?” Paul continues. “The end of those things is death. But now that you have been freed from sin and enslaved to God, the advantage you get is sanctification. The end is eternal life. For the wages of sin is death, but the free gift of God is eternal life in Christ Jesus our Lord” (Romans 6:21-23). So we’re not free. But we’re slaves no longer to sin and death…Paul says that now we’re enslaved to righteousness, and to God. So that’s…better? I guess? It’s an odd image, especially to our American ears: enslaved to God. But let me explain it by telling you a story. I don’t know if this story is true—it was told to me as though it was. It might be apocryphal, told to make a point, but here’s hoping it really happened. Toward the end of the Civil War, before America’s slaves were freed, a northerner went to a slave auction and purchased a young slave girl. As they walked away from the auction, as the girl wondered and feared what this new master would be like, the man turned to her and said, “You’re free.” With amazement—and probably a little suspicion—she responded, “You mean, I’m free to do whatever I want?” “Yes,” he said. “And to say whatever I want to say?” “Yes, anything,” came the response. “And to be whatever I want to be?” “Yes.” “And even go wherever I want to go?” “Yes,” he answered with a smile. “You’re free to go wherever you’d like.” She looked at him intently, thought for a moment, and replied, “Then I will go with you.”

This is our slavery to Christ. Paul says in 1 Corinthians that you are not your own. You were bought with a price: the precious blood of your savior Jesus Christ. This is how and why our current bondage can be such Good News: we are bound to Christ, and bondage to Christ isn't slavery...it's emancipation! It is freedom from trying to justify yourself, from trying to save yourself, and it is the freedom to rest in the salvation of Jesus. In baptism, we proclaim to you that you are sealed by the Holy Spirit and marked as Christ’s own. Forever. You’re his! This is Good News! This is the Gospel: You are not your own; therefore, you are never on your own. When we stand before a holy God and have to answer for the lives we’ve lived, on our own is the very last place that we want to be. The wages of sin is death, as Paul says. On our own, death is the only outcome. But we are Christ’s. We are never on our own, and the benefit of being Christ’s possession is eternal life.

All the validation you seek from those phone calls, emails, wardrobe choices, job performances, relationship developments…all of it has lost its power over you. All the lassos you have wrapped around you, pulling you in a hundred different directions have been loosed. The cords were cut when Jesus cried “It is finished!” In Christ, you have all the validation you’ll ever need. You walk willingly with your new master, who has purchased you with his blood. Jesus says to his children, to you and to me, “I have bled for you. I have died for you. I have called you by name. You are mine.” You are not your own, and you are never on your own. You are Christ’s, sealed by the Holy Spirit and marked as his, forever.
Posted by Nick Lannon at 11:05 AM